It is with great sadness I report that Brian Reynolds, a frequent contributor to this site, was killed on August 22, 2004 on Middle Palisade, west of Big Pine, CA. Brian was 31 years old. Our thoughts and prayers go out to his family.

Wilderness Travel Course leader was no amateur
By Beth Epstein

Brian fell unexpectedly from a ledge during a rest stop as the climbing party approached the summit ridge. He had been climbing strongly, and those standing near him said he released the rock and fell back as they waited for a guided group with climbers on a short rope to descend past them. One of the leaders of Brians party, Patrick McKusky, wrote:

We were about half way up the third-class section of the climb when we halted to let another group descend around us. Brian was standing on a ledge, about eight feet to my right. As the other group was moving past us, Brian fell backwards. He uttered no sound and he made no movement. He passed away instantly and he did not suffer. None of us know how or why he fell. Less than an hour earlier, I asked Brian how he was doing. He looked at me with his beautiful smile and said, Everything is perfectly fine.

The leaders descended to him and finding his body lifeless, called the Inyo County Sheriff. The Inyo Search and Rescue Team flew in on a Forest Service helicopter and remained with his body overnight until it could be evacuated the next day.

An avid outdoorsman, Brian took the Wilderness Travel Course in the San Gabriel Valley in 2000, and he graduated and became an assistant leader. His love of climbing and his skill as a climber grew and led to frequent trips to Joshua Tree and ascents of increasing difficulty in the Sierra. He was a gifted teacher, beloved by students.

Brian is survived by his mother, Jean, his father, Russ, his brother, Dave, his stepmother, Dee, and his stepbrother and stepsisters, Trevor and Hallie. 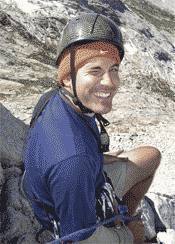