An excellent route that brings you to the proper summit of Angel Wings by tackling the right most wing of the two giant granite spires that make up the defining feature of Angel Wings. While not very sustained, I found this route to have a good mix of climbing styles and difficulty requiring one to use a variety of techniques. The 5.11+ 'Black Roof' pitch shouldn't scare anyone away and freeing it provides some of the coolest and most powerful moves I've ever done on an alpine route.

P1: 130' 5.10b/c. The climb starts after scrambling up ramps and ledges until you cannot go any further right (there's actually two newish looking button head bolts here?). From here climb up vegetated cracks and some very insecure flaring grooves with spaced out pro to a squeeze chimney. This can be a stressful pitch but worry not, nothing else on the climb is as insecure. Stop somewhere around the 1st black band or link with next pitch.
P2: 140' 5.9+. Continue up through 1st black band into another Chimney system eventually stopping on a ledge around the 3rd black band or rock. We tried to link 1&2 with an 80m and came up just short of a descent ledge.
P3: 150' 5.7. Easy but dirty/loose climbing leads you through the 4th black band of rock
P4: 120' 5.6. Find your way up (or around) a 5.6ish slot/offwidth, after which you'll see the ominous 'Black Roof' pitch looming above. There's a great ledge just below it but if trying to link with P3 you'll be short about 10' even with an 80m.
P5: 60' 5.11+++. Wow! This pitch is sick! Pull some burly and creative moves to get over the roof (I actually used a bicycle move with my feet). Once on the face, get some pro in and commit to a wild 5.9 nob traverse into a chimney system. It's not over, this chimney climbs sorta like a bomb-bay even though it doesn't look like it. Proper use of slings will minimize the rope drag and you should be able to reach a large ledge just left of the chimney system.
P6: 100' 5.7: Continue up chimney system that makes up the 'Central Gulley' going past the second chalk stone before traversing right where it makes sense. Stop here or you'll need to build a marginal anchor higher up.
P7: 160' 5.10a: Many options here. Ultimately you want to work you way straight up on the face and then right at some point, face climbing with some mild run outs. The Fidler/Moynier guide has you stop before traversing to the giant flake with horns but I think it is better to go all the way to the flake, giving you a much better belay position for the next pitch (which your leader will appreciate). Where exactly you make your final traverse right is a mystery, but you want to make you way onto the very edge of the arete and even slightly on the right side until you see a headwall with two distinct curved cracks going up. We belayed off the horns on the flake but I recommend belaying at the top just below two small huecos.
P8: 80' 5.10+ (felt 5.11a). Execute some thin moves above and make your way into the wide twin cracks. This pitch felt harder than 10d and it was both physical and desperate at times. Fidler/Moynier topo indicates you continue straight up to an obvious ledge system. My partner traversed right at the top of the twin cracks on a crimp rail to a jug but this is definitely NOT the way to go.
P9: 170' 5.8. Amazing exposed climbing on the very edge of the arete using chicken heads everywhere (mostly 5.6). Make your way slightly left around a blank section and stop near a prominent pillar of rock.
P10: 140' 5.7. Climb around Pillar and up a fun 6" crack, continuing up easy terrain with the occasional move around a blank section.
P11: 120' 5.7 More of the same until you get to the base of the final section of the false summit.
P12: 60' 5.7: Filder/Moynier topo lists this section as easy 5th. I feel it's prudent to warn that there is definitely some thin climbing here with sparse pro and while not hard I think it's good to know about if you intend on simul'ing these last pitches.
P13: 3rd class. From the top of the false summit, walk across the side walk (great exposure) and up third class ledges to the proper summit.

From Upper Hamilton Lake camp, head down the HST for about 12 minutes ultimately crossing just past Lower Hamilton Lake where it makes sense (maybe somewhere around a large boulder?). Bushwhack a bit then head up talus to the large right-trending ramp system to get to base of route. Eventually you'll have to make a few rock climbing moves to get to a large ledge system which will take you to the base of the climb on the right side. There are two newish looking button head bolts there; not sure what they are for (maybe a rap route?) 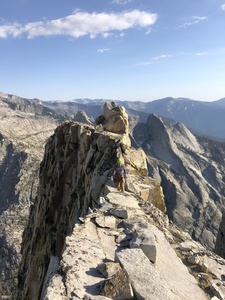 Evan on the sidewalk 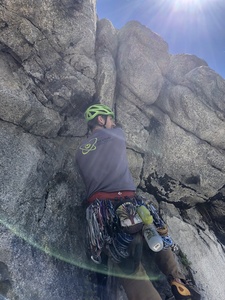 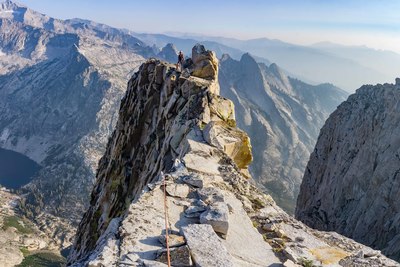 another sidewalk shot. Valkyrie top out on the… 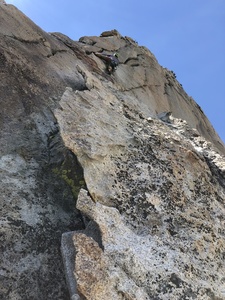 Evan heading up to the twin cracks, belaying fr… 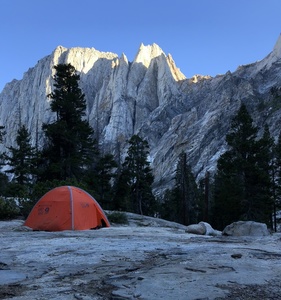 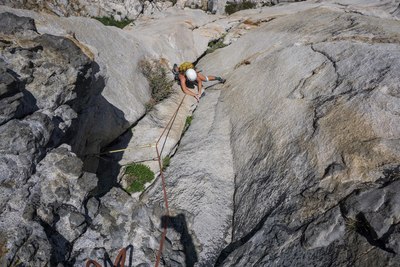 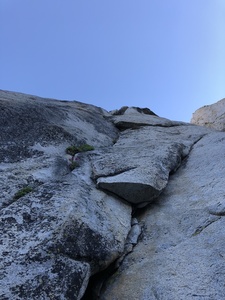