A squat, bullet shaped spire with three distinct pillar "tines". It is detached from the end of a peninsula that separates the main canyon from a side-canyon that branches off to the west. The climb involves some poorly protected wide crack/chimney climbing and some very decomposed sections of rock.

Start out of the cool, narrow corridor that separates the tower from the cliffs on the north side of the tower.

P1- Chimney up between the tower and cliffs for a bit, following a wide crack on the tower itself. When the chimney becomes too wide, step over to the tower onto a shelf. Crank a hard, friable OW crux with a tipped out #6 Camalot for pro to a ledge. Chimney back into the center of the tower to a stance and 2 cold-shut anchor. The rock getting to this stance is very decomposed, be careful what you use. 5.10, 65'

P2- A fistcrack leads to a curving, smooth squeeze chimney with a drilled angle protecting the entrance. Wriggle up this strenuous squeeze for 30' or so with no further pro until a horizontal placement (#.75 Camalot) right before the exit. The rock in the chimney is the cleanest and best on the route. The chimney ends on a shoulder. Yard past a bolt and a drilled angle on the short, sandy headwall above to the summit; this stretch would go free, but would be difficult face climbing on gritty rock. 5.9+, A0, 65'.

Hike up the main Roundhouse Canyon, and take the first wash that branches off to the left (west) side into a minor, subsidiary canyon. The Trident will be obvious on the peninsula between this side-canyon and the main canyon. Walk up the side-drainage below and beyond the tower, almost to the back of the side-canyon. Head up the short hillside, weaving through some short scrambles up choss bands, and head back south to the base of the tower. Start out of the narrow corridor on the north end of the tower.

Rap off in two rappels with a single 60m rope. 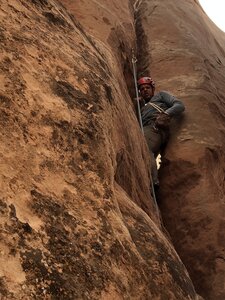 On pitch 2 about to enter the chimney. All I h… 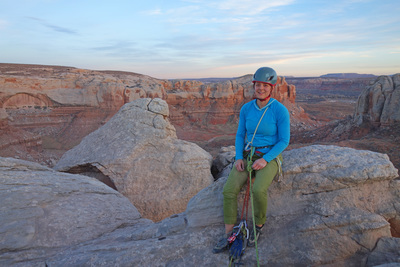 Emily on the summit as the sun sets. 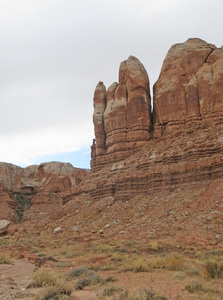 Trident Tower from a distance in the main wash… 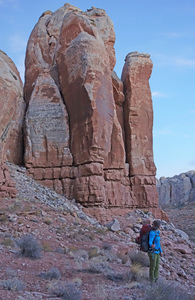 The route starts out of the cleft on the left s… 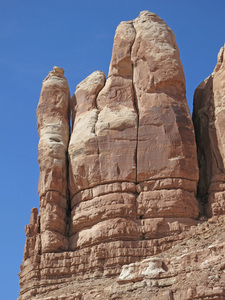 A close up view of Trident Tower from the main…