The National Park Service manages the Pecos River starting at the Rio Grande and continuing 14 miles up river. They own the cliffs up to an elevation of 1,144 feet and have no policy against climbing up to that height. Climbing above that elevation is considered trespassing. On topo maps, the cliff tops tend to be around 1,200 feet. The routes in this section are on the East bank of the river between the boat launch and the Hwy 90 bridge. The NPS owns this section of cliff from top to bottom so all the routes described here are 100% OK to climb. There is another exception to the elevation rule: just north of the high bridge, on the east bank of the river, several acres of cliff line are owned by the Rock Art Foundation. This section at one time had bolted routes on it, but there are Native American pictographs there and climbing is now strictly forbidden. 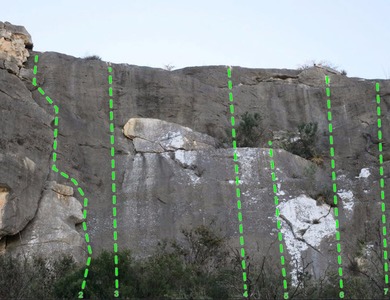