The classic line on Huntington. The first ascent took 3 weeks, the current speed record is around 13 or 14 hours. Time required will largely be dictated by conditions. If the upper ice face isn't a dangerous slab and the lower angle sections allow for fast travel doing the route in a day camp to camp is a reasonable objective, however this is oftentimes not the case. The description here is from late May 2014, a year with incredibly good conditions. This description will make much more sense if you have the Supertopo in hand, it is quite accurate with the exception of the few pitches after passing the Bastion. We found those pitches to be M4-5 and not 60 degree snow.

Once across the bergschrund (can be tricky) 5 rope length of 50 degree ice leads up to the lower park at the top of the stegosaur. Easy snow walking through the upper park gets you to the base of the spiral. This section took us perhaps 15 minutes to cover, but I have talked with folks who wallowed through chest deep sugar for hours in this section.

The Spiral, The first pitch clocks in at around M6, phenomenal climbing up a corner with a few blocks to pull around that don't exactly inspire confidence with their level of attachment to the mountain. Good pro. There is a obvious hanging belay out right of the corner that can be skipped to reach a small stance up and left. From here the second pitch of the spiral continues up, first left and eventually back right. The moves are powerful but there are bomber constricting slots in the cracks for tools, and plentiful fixed pins. this pitch can be run to a good ledge below the Bastion. From this belay a short traversing rightward pitch leads to the base of a 5.9 chimney. The chimney pitch has an awkward chockstone near the top, leading to a fixed belay. The next few pitches are easier mixed climbing over rock, M4ish, getting progressively easier until the fantastic bivi/brew spot at the base of Nose. This is the best place to stop and brew up, as above flat spots are either build your own or out of the line of ascent. The Nose takes awhile to climb anyway, so might as well top the water off. Don't forget to look around and take in the views.

The Nose, C1. It would likely go free at M8-9 if you're so inclined. Vertical cracks lead up to a 30 foot section over overhanging green camalot sized crack, with smaller cracks on either side. Short pitch, 80 ft.

From the hanging stance a grovely and runout pitch leads up and left to join the top of the West Face Couloir. From here we found good neve slopes intermixed with very moderate mixed steps, moderate enough that we soloed/simuled up to the start of the icefield.

The icefield itself is unrelenting 50 degree ice. One member of our team soloed up to the icefield boulder. Simuling is most likely faster, as when the leaders calves explode upon reaching the boulder they can put the second on belay, allowing for a much more rapid following pace to be implemented. Three pitches off the Boulder gets you to the ridge crest. Be wary here, as the other side is a massive cornice that drops 5000 feet to the West Fork of the Ruth. Traverse right along the ridge on steep snow (the flat part is a cornice) until the ridge broadens and feels secure enough. There is a short 40 or so foot ice step in the ridge that must be surmounted before easy walking to the summit. Enjoy the fleeting feeling of success before beginning the massive (but relatively straightforward) descent.

To get down, reverse the ridge and begin rapping. Our first anchor was a bollard, after which we reached the ice and made V threads, basically heading plumb vertical, trending ever so slightly skiers right. Don't follow the way you came up, instead rap into the rock overhanging the top of the West Face Couloir. Once you get to the rock there are fixed anchors to follow that dump you right into the WFC. In the couloir it's around 6 or 7 200 foot raps of v threads, then more raps of rock anchors. Eventually you reach a big 50 degree snow face that probably could be downclimbed. When we got there we had been on the go for 22+ hours and decided to make bollards. 5 or so bollards got us down past the schrund. From there it's a short slog back to camp, all of 50 feet from the airstrip. Brew up, stuff some food down your gullet, and go to sleep. You just climbed one of the best routes in the world.

EXTREMELY IMPORTANT IF YOU'RE PLANNING ON GOING UP THIS:
There is a massive amount of old fixed goldline, beginning at the top of the Stegosaur and ending where the route joins the WFC. If we had known this we would have come better prepared to hack some of it out and clean up the mountain. If every party pulls some of it out the route will eventually become clean. This would be nice. Bring a big serrated knife and take down what you can, garbage is lame in a place as special as this.

6 ice screws. Cams from blue alien to blue camalot, doubles in the small sizes up to gold C4. Brought a few pins but never placed them. Tat in case you have to back up anchors. A triple in green C4 could be useful for the Nose if you're serious about freeing it, otherwise just backclean once or twice. 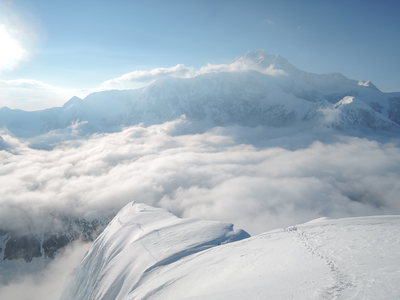 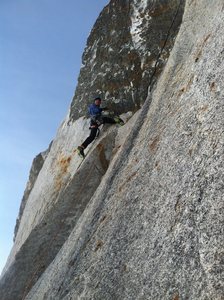 Sam Hennessy crushing the Nose. watch out for t… 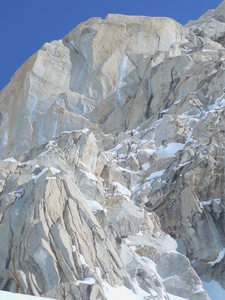 Climbers on the Spiral 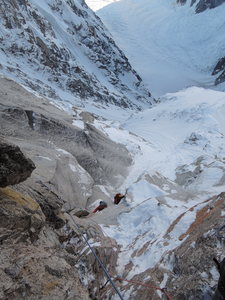 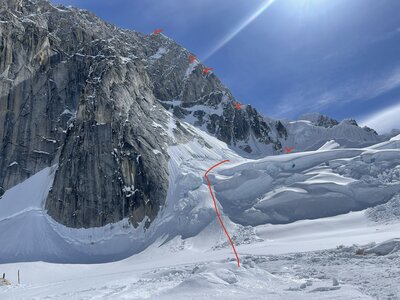 From right to left, start of route, base of spi… 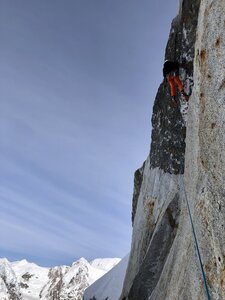 Back cleaning the nose. 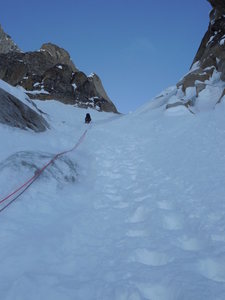 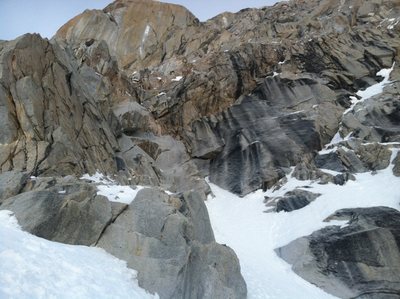 The Spiral, with the Bastion above and left. 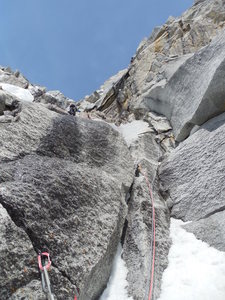 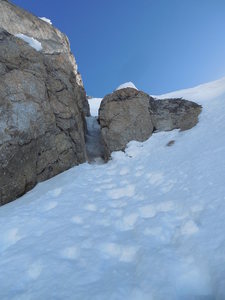 the Alley. short, fun mixed. you can also just…

More About The Harvard Route