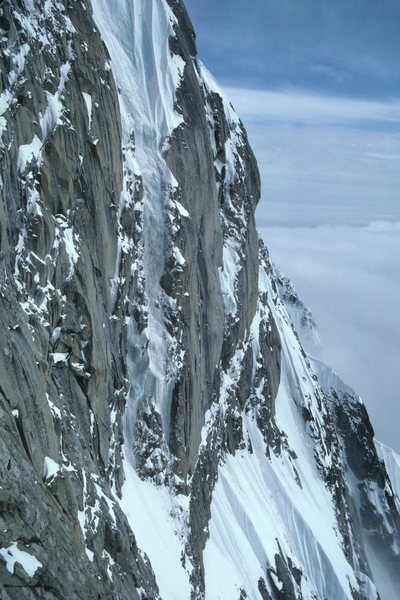 Taken: "...while bailing down the West Face from the Northwest Ridge." (Mt Huntington, AK) photo by Mountain Project contributor & gnarly Alaskan scale climber George Bell, submitted 2011
There is a lot of agreement that this gully, splitting Yosemite sized granite walls, is easiest way to the summit of Mount Huntington. Basically, the West Face Couloir is a variation of the Harvard Route. Both are equally popular. Neither is easy! That is why some say Mt. Huntington is considered one of the hardest summits to tag in the world. 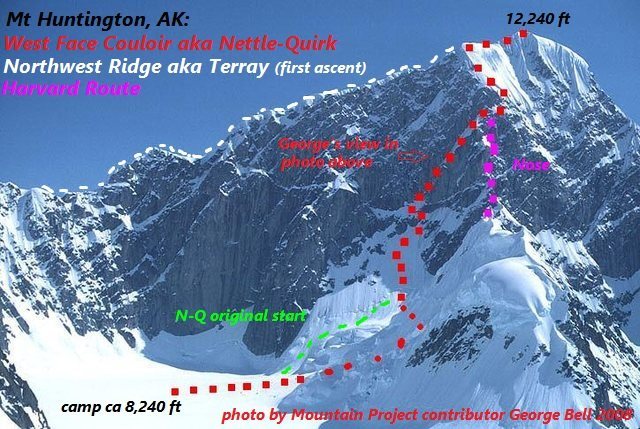 THE HUNTINGTON CURSE
In 1965, the Harvard expedition lost a member to a mysterious rappel accident while descending the "Mountain of My Fear. Afterward, bad luck seemed to befall others, even after leaving the mountain. 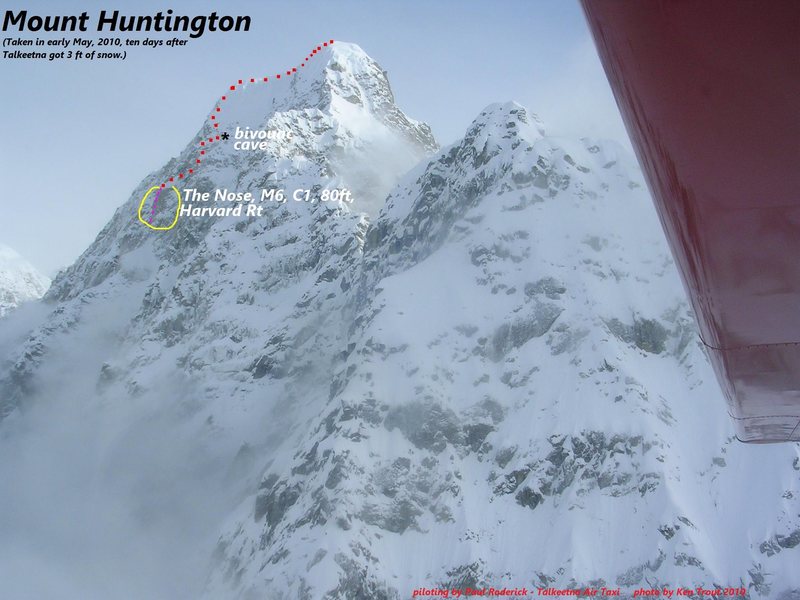 At the point where the curse starts to take effect. The cave is said to be shallow and hard to cook in. My black mark might be a bit off, it should be lowered to the next cliff down probably.
WEST FACE COULOIR HISTORY
John Evans, Denny Hogan, and Vic Walsh were the first to climb the West Face Couloir to the connection with the Harvard Route, April, 1978. Denny Hogan returned later and was repulsed again by this very difficult mountain. Twice repulsed is not unusual on this fearful peak.

In June of 1978, Steve Matous, Ron Matous, and Bruce Adams, all top notch climbers from Boulder, Colorado, climbed to the summit ridge, near the top. 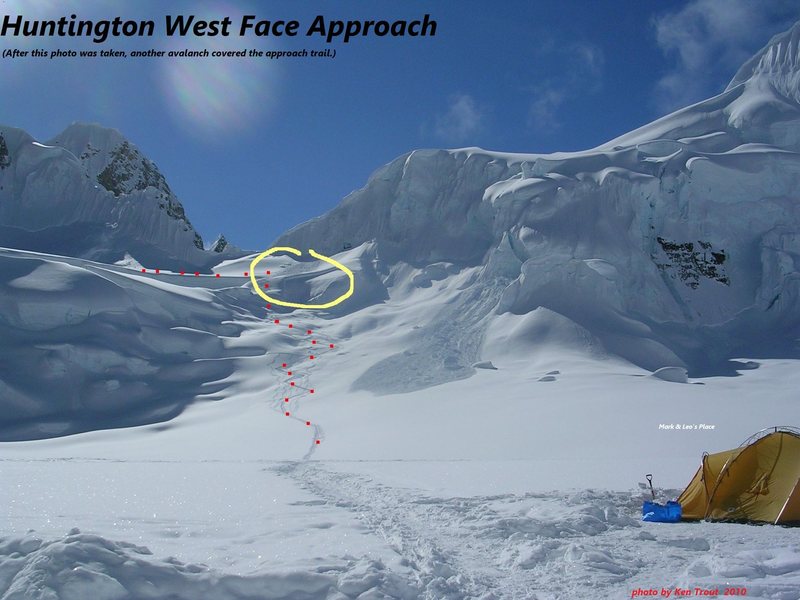 Even the approach is cursed!
1979, Denny Hogan came back with Peter Avenali and Peter Lev. They climbed the couloir again, but no summit.

Canadians Jim Haberl and Rob Rohn got within 75 meters of the summit and thought it was a new route in 1984. After three days, including a leader fall on a "grade V waterfall", They were turned back by "a rotten, vertical wind roll of snow" (Pushing the Limits, Chic Scott, 2000).

Finally, 1989, Dave Nettle and James Quirk bagged both the couloir and summit.

Years later, one of the best ice climbers I have ever known, Michael Gilbert , with Dave Bangert, climbed the West Face Couloir twice in one "bitterly cold" early May visit. On the second climb, they reached the French Ridge in 5 hours, 08 minutes, but regrettably stopped at 12,040 feet.(AAJ, 2001, p202)

The West Face Couloir was the route used for the first winter ascent of Mount Huntington, Colin Haley and Jed Brown, March, 2007.

APPROACH
This is Talkeetna Air Taxi country. Since the year 2000, grateful reports in the AAJ tell only one pilot's name for landings on the remote East Fork of the Tokositna Glacier; Paul Roderick of TAT. His company has a lot of places for climbers to stay and patient staff members.

Mt Huntington grid boxes are 1 mile across contour internal: 100 feet
Start the climb with roped glacier travel around the right side of the large crevasses blocking passage through the ice-fall. Serac avalanches threaten this crevasse dodge. Two photos in the gallery below show debris covering the approach trail. This hazard is not well noted in the mountaineering literature or guide brochures.

The photo in Quirk's AAJ story shows that they approached up the steep slopes left of the icefall. 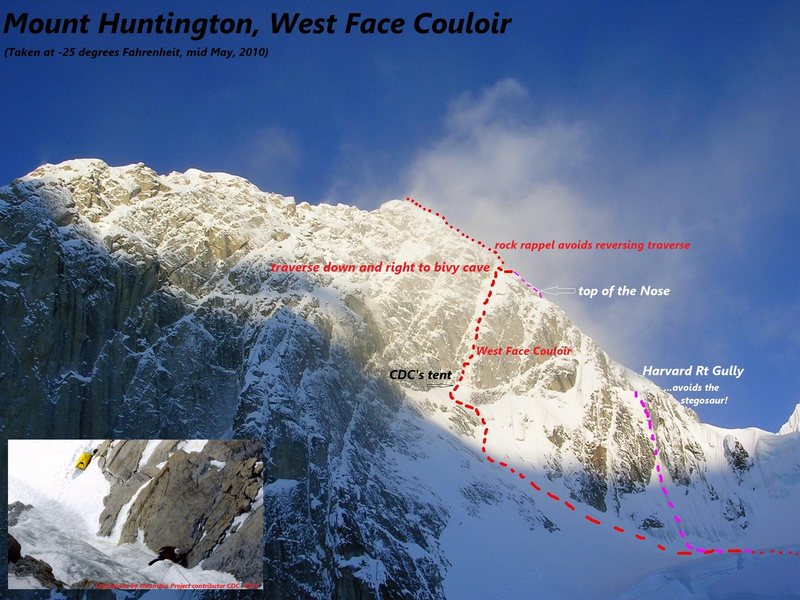 photo by Alaskan fisherman of the Fairweather coast Scott Visscher
The route starts with finding a way past the bergschrund and then climbing the lower snowfield. Beware of a second crevasse lurking below the main 'schrund. After a couple hundred meters, angle left to avoid granite slabs and shallow ice. Then turn right again until a short ice pitch through the first short rock band is reached. If simul-climbing, then this is the common first pitch.

Above the first rock-band crossing, climb snow, first up left, then back right to the base of the 1,200 foot West Face Couloir.

The first hard pitch be passes left of an overhanging, somewhat menacing, blob of ice. The second pitch traverses right, also reported as cruxy when the ice is thin. The steepest ice found on the lower pitches. After the entry pitches, the rest of the couloir is a 60 degree ramp for about seven more pitches (Photo at right).

From the top of the couloir, traverse right, and down a bit, to the upper Harvard Route. The best two ledges on the route are found here. A small "brewing" cave is located above, just before the last bit of traversing. It is also possible to rappel the steepest pitch of the Harvard Route to reach the good ledge at the base of "the Nose", not so popular.

After the traverse right, mixed climbing leads to steep snow with rock islands and finally the summit ridge.

Lucky teams follow the summit ridge to a final step, and then the top.

The West Face Couloir is the standard descent for all routes.

One person told us no rock gear was necessary. Another team brought a single set of cams and wires and told me they used everything and backed up some funky rappel anchors too.

Steep, unconsolidated, snow stops many summit attempts. Shovels (and the time to dig) are said by some to be key in such conditions. Also, long shafted ice axes make pulling soft overhangs, like summit cornices, easier.

A hanging stove and the knowledge to use it successfully in Alaska Range cold is critical early season.

During early May it was observed that the most successful teams, Paul & Aden from Alaska; Mark & Leo from The Netherlands, were the only teams who cooked inside one tent with canisters stoves.

The responsible thing to do is bring your own sat phone. It used to be possible to rent satellite phones in Anchorage, that company moved to Arizona, 2010. One interesting fact, or affectation of the curse, is that after Nettle and Quirk's 36 hour climb, they had to wait 300 more hours to get flown out. Ten days to make radio contact in the deep gorge of the Tokositna. Four more before a plane could fly in. 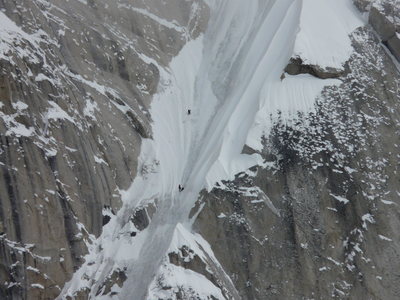 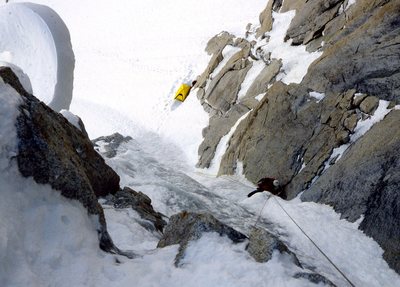 Starting the first part of The N.Q. Couloir. 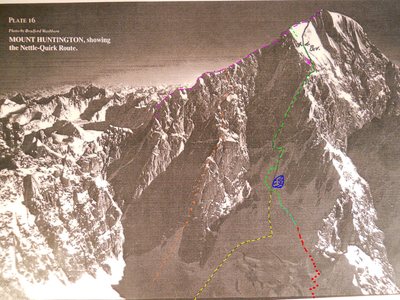 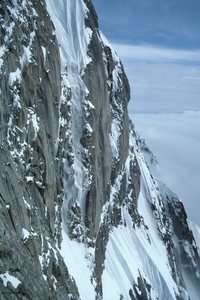 A remarkable view of the West Face Couloir whil… 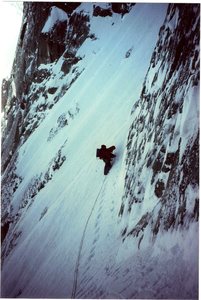 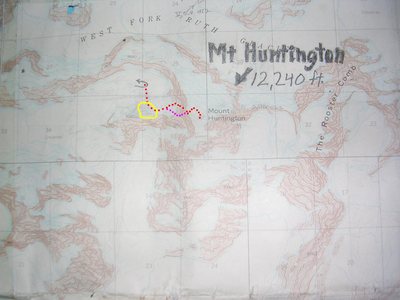 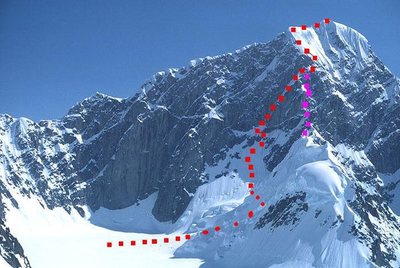 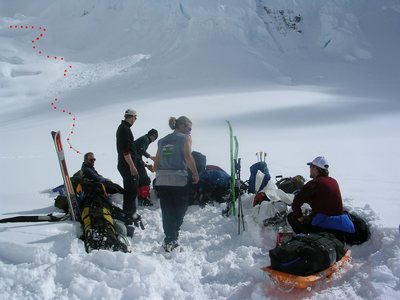 Three expeditions waiting in the middle of the… 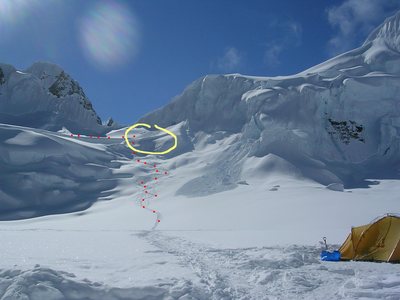 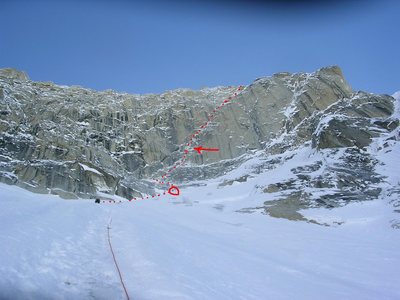 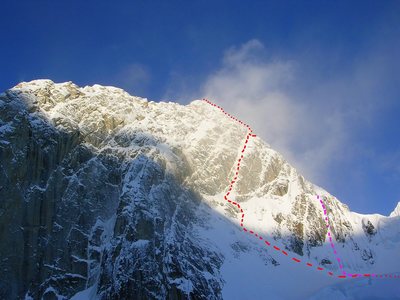 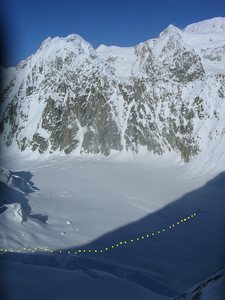 Base Camp in the shadows.