This route makes a circular path along the ridge and across the peaks overlooking Budd Lake, on the south side of Tuolumne Meadows in Yosemite National Park --> see on map
Just hiking (or running) on that ridge for so long with wonderful views in both directions would be great. Even more, it includes some great narrow / arete sections, also some fun climbing peaks which might be too short to justify as an outing individually -- and optionally access to some famous routes (for those who have the speed + endurance + skill to include them).

Actually this route does not include anything like the whole geographical Cathedral Range as shown on maps -- just the northwestern section, which is most accessible to trailheads on highway rt 120, and has lots of fun and spectacular climbing.

Peaks along the way are:

All latitude/longitude points given below, also other helpful waypoints and tracks, are in a GPX file linked from this page

history
Most of the individual peaks were climbed by the 1930s. People were doing the Traverse at least by the 1980s. John Moynier + Claude Fiddler described it (with much less detail than here) in 1993 in Sierra Classics: 100 Best Climbs in the High Sierra, and again in the second edition, Climbing California's High Sierra (Falcon.com 2002). Peter Croft described the Cathedral Range traverse (in the opposite direction) in his high Sierra guidebook, The Good, the Great, and the Awesome (MaximusPress.com 2002).

strategy
Start and finish at the Cathedral Lakes trailhead on route 120 is the simple short way.
For a shorter traverse (or to allow more time for optional Matthes Crest section or Cathedral SE Buttress climb) could ...

The plan is first get to Budd Lake, then to the base of the Unicorn climb ...

Go roughly S about 0.6Mi / 1000m close to Budd Creek with some ups and downs. Next the trail goes onto a long + wide rock slab area, and at the same time slowly curves to the right - SSW - away from Budd Creek. It's true that one branch of Budd Creek runs down from Budd Lake, but if you try to stay close to this creek, you'll soon be off the trail bushwacking (which is doable and perhaps fun, but more work and time) - and if you follow the obvious east branch, you won't even go to Budd Lake. It's easy to miss the trail here on the slab. The key is to recognize is that the trail often runs between two parallel lines of rocks, with the individual rocks spaced about 3-6ft / 1-2m apart -- and be on the lookout for when those lines curve Right. The slab ends after about 0.25Mi/400m. About another 0.1Mi / 120m there is a move up R on rock, and continue on the dirt trail for another 0.3Mi / 500m to key turn-off point (lat/long ~ N37.8527 W119.3936) (altitude 9540ft / 2910m). This is about 1.0Mi / 1600m from leaving the main Cathedral Lakes trail (with overall gentle uphill of +700ft / +215m).

This turn-off point comes after the Cathedral Peak trail comes in sight of a little creek below its L side, and hooks R around the end of a big fallen tree, then goes gentle down curving L, then roughly flat a short ways aiming straight at a tree. There it's easy to see the Budd Lake trail going off to the L - (At that point the Cathedral Peak trail turns half-R and goes uphill away from the creek.)

(4) Next objective is to get to the base of the N-NW face of Unicorn Peak.
Go SE (on the E side of Budd Lake) about 0.35Mi / 600m, aiming for a col/saddle above a rock slab slope. The slab is steep-ish, likely requires some wide zig-zags to get up - (wouldn't want to have to come down this when wet).

Unicorn high point is the North summit (lat/long ~ N37.8457 W119.3821) (alt ~ 10830ft/3300m). From the E side of the Unicorn, hike upward diagonally around to reach the bottom of the rock of the NNW face. Then climb the rock up to the notch between the north peak and middle peak of the Unicorn -- or aiming for some point between the north summit and the notch. Interesting climbing, and it might be possible to find a way to do this all at the grade of class 4, but it's sustained and not short, so it would not be surprising if some class 5 moves will be encountered.

. . (Alternate way to this notch: Climb the slabs of the W face of the ridge S from the Unicorn toward the talus heap ("Althuski"), then go N along the broad ridge.)

Getting from the notch to the N summit is traditionally graded class 4, but one usual way includes an exposed overhanging move (positive holds) - which many people might grade as class 5.
. . (The notch can be reached more easily from the E side from the Lake Elizabeth trailhead, but that requires a car/bus shuttle, and misses out on some interesting climbing.)

Come back down off the N summit the same way. Could also tag some of the other (easier) summits. Or there are some interesting moves along the narrow ridge going south from some of the other Unicorn summits. More interesting if stay more directly on the arete where possible. More exposure to play with if make some moves on the W side.

Cockscomb (lat/long ~ N37.8356 W119.3847) (alt ~ 11060ft/3370m) is about 0.4Mi / 620m SW from the rock heap, but it's more complicated to get there. The easy way to climb the Cockscomb is on its W face -- which is most easily reached by going around its S side ... Perhaps leave the Cockscomb NE ridge fairly early, then horizontal across dirt until fully around the base of the SW end of the peak. - (? a more aesthetic way might be to stay closer to the NE ridge and aim for the notch between the N and S halves of the Cockscomb ? see this photo
. . Other folks report going around the N side of the Cockscomb, or climbing it by its NW face -- or even traversing the peak by its E face and W face (some did not like rock quality on W face).

Descend W to the Cockscomb-Echo col (alt ~ 10660ft/3250m).
. . (If need to retreat from here in wet weather, note that between this pass and Budd Lake are two large steep-ish rock slabs to be descended (slippery?). So consider instead first going down SW then around the S and W sides of the Echo Peaks.)

Matthes Crest is optional, but the rock structures on the arete are so interesting (especially the section north from the North summit) that it's tempting to visit it somehow. Several options for embracing or avoiding different sections of the Matthes ridge. See North ridge
description and Comments - also this discussion
- also Comments on the Traverse South Ridge page

Echo Ridge - W summit is higher (lat/long ~ N37.8348 W119.3959) (alt ~ 11150ft/3400m) than E summit - (also higher than Cathedral Peak). The upper section of the East arete has wonderful knife-edge sections. Many people grade it as class 4, but might be a low class 5 down-climb move off the E summit.
. . (For maximum fun climbing, try to spend as much time as possible directly on the top of the ridge - "balls over the razor" - or make moves across from one side to the other - or look for chances to climb on the steeper side.)
We saw a report that it might be possible to start by climbing somewhere on the N face of the E ridge.

After the high point of Echo Ridge can find some additional narrow arete moves on the West arete a bit lower.

Next a short way to Cathedral Peak is by down-climbing the W side of the col between peak 3 and peak 2. The top section is fun scrambling, but lower down the rock gets loose and with dirt. An obvious way (with less loose rock) is to return to Wilts Col and go N down (on dirt) from there. Another possible short way (not checked by us) is to return to the col between Echo 1 and Echo 5, and go directly N down from there.
. . (If need to exit now from this Traverse, it's non-difficult cross-country travel from Wilts Col to Budd Lake, or from W side of peaks 1-2-3 to hit the trail N below Budd Lake.)

Next hike/run cross-country N about 1 mile / 1700m to the southeast base of the summit cliffs of Cathedral Peak. Likely it's easier to aim a bit east of the cliffs, to hit the normal trail (improved with stone steps) to Cathedral Peak, and finish on that.

The normal route to the summit goes up the trail around E side of the summit cliffs. This trail now has stone steps. It stays pretty close to the base of the cliffs along the E side, at first N, then curves NW. After about 0.15Mi / 230m distance with vertical gain of +390ft / +120m it reaches a barrier. For a nice view / snack spot without the difficult + exposed summit climbing, here turn R and go N thru a narrow slot in the rock to a flat spot. To continue to the summit, scramble up about 25ft diagonal Left, then horizontal Left (W) around the N corner of the summit cliffs, past some bushes to wide ledge on the NE side of the NW face.
. (For a more interesting adventure, do not read the following instructions, instead figure it out for yourself, like John Muir when he was here first in 1869) ...
details: Next climb the NW face, likely with some zigzags (many people find it easiest to go all the way over to the SW side), finishing (50-80ft higher) at the NE side of the face. Next diagonal up Right to a notch, and cross the notch to the S face. Traverse horizontally SE about 10ft to the bottom of twin cracks. Climb up those about 12ft to the SW side of the summit block, then to the flat top for a great view.

descent
From the summit of Cathedral Peak, return the same way ... down the twin cracks, across to and down the NW face, around the N corner, and down the E side to the southeast base of cliff. Next down the unofficial Cathedral Peak trail, first steep-ish SE, soon curves NE gentler, later NNE (careful not to lose the trail while on the wide long slab) to meet the official Cathedral Lakes trail. Finally NE down on that back to the trailhead on highway rt 120. (descent distance 2.7 miles / 4.4 km).

GPS . All latitude/longitude points above, also other helpful waypoints and tracks, are in a GPX file linked from this page
. But they're given mainly for planning + reference. This is a "friendly" area for wilderness navigation with a map (and compass). For experienced parties using the detailed instructions above, carrying a GPS device should not be necessary for navigating the approach + route in good weather.

Light alpine trad rack, long slings for around rock horns. Significant portion of climbing on narrow ridges best protected by the leader's skill in running the rope around rock features. Almost no fixed gear. In early season, might need snow or ice protection at some points. Anyway,
most people who try this traverse do it solo. 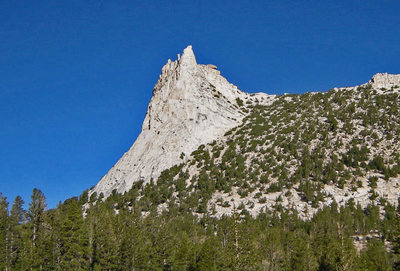 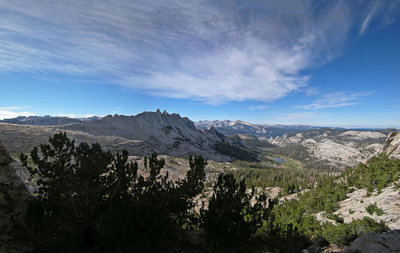 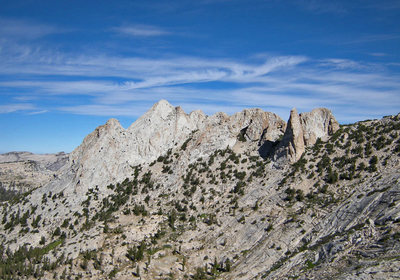 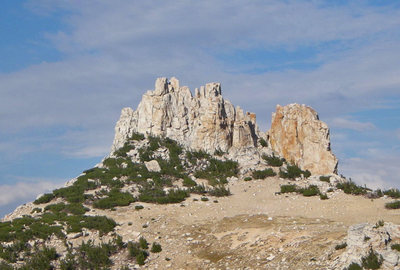 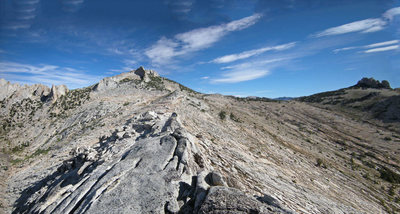 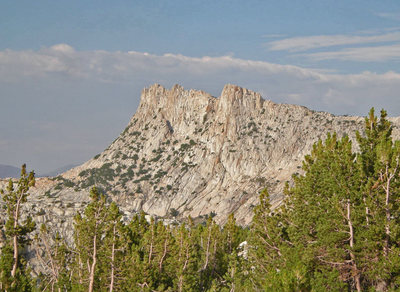 Unicorn Peak from the west 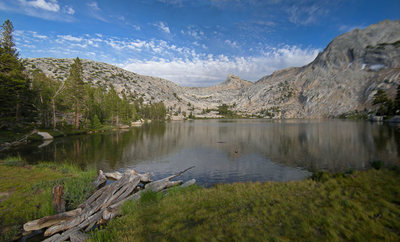