Bambi Slayer is one of the "early" routes at the Aretes. This is the type of stone you traveled all that way for. As soon as you step off the ground this climb hits you full on. The "ground" at this point is a ledge 80 feet above the base of the Visions Wall. Pull out and onto the wall with insecure lie backs to increasingly better holds. The crux of Bambi is getting past the second bolt. Even though the crux is behind you, the climbing never lets up. This is gently overhanging, well featured limestone-sucker holds abound, but there is always another jug coming up. Make it through the pump and you'll be rewarded by a huge view 150 feet off the deck. Many consider this route 11a but the First Ascentionists rated it 10d. The FA was done ground up with 40 foot falls taken by both members of the first ascent party, including one head first when a hook blew. They added more bolts later to make it a fun adventure. Great exposure!

Bambi Slayer is the farthest right route in the Upper Shooting Gallery. For added fun, climb the Shard and step right to the ledge and then launch up Bambi Slayer for a 150' route(17 draws). 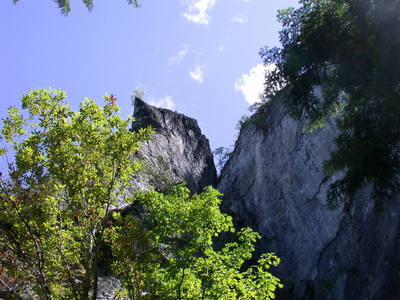