AN internet disucssion with Pete reveals that the upper two pitches of this route were done by Pete Gallagher and Peter Williams, with me doing the lower pitch as an access. What follows is a description plus why I was confused as to who had been on the upper crack prior to me.

Desert Rock II is a bit hard to figure out sometimes. It refers to the first route on the tower as the "Southwest Corner", but then also says "traverse east" to find the upper pitches. That being the case, I may have done the second and third pitches of the Southwest Corner, even though I climbed a corner on the east face. The corner on the southwest face directly above the start of the Southwest Face is a southwest conrner and has also been climbed...

If the last pitch is indeed part of the Southwest, then the book also calls it A3+. Not so on the modern scale, though I admit it is very hard to determine what will hold and what won't in entrad... so much to figure out.

Anyway, the route ascends the south ridge then traverses north east across a big ledge and some very soft stone to an anchor below the southwest corner. This corner had been climbed once, maybe twice, but it was very long ago. The pin scars already had varnish in their tracks.

The name of the route should imply a combination of pitches from other ascents and goes with the name of the tower. The Etesian Wind is a Greek wind that was prayed for during Xerxes invasion of Greece. The Etesian helped wipe out the Persians at the Battle of Salamis in 480 BC.

P1 - 5.9/A1 - 120 Ft. - Start on the west face below the saddle that separates the tower from the smaller tower to its south. Ascend a loose chimney of Dewey Bridge to the saddle, then pass two bolts on dusty free climbing. Move left, then right around the arete (drag?). The rock gets solid, then degrades as you get higher. I aided the crux as I was by myself, but I'm guessing it would go free at mid 5.10... soft. Watch for lots of loose rock at the top. On the big ledge find an old bolt and pin in the shale stone just behind the big boulder.
P2 -5.6R - 35ft. - The talcum pitch...Traverse the bedding seam in the east face to the first corner. There is an anchor here. Gear is questionable. Watch out that the big block below the anchor so doesn't spill off with you on it.
P3 - 5.9/A2 -100ft. - Go up the overhanging, thin corner of Entrada on lost arrows then small angles. This may now be possible, after my ascent, on #4,5,6 HB's, at C3. It had been climbed perhaps one or two times prior to my ascent, but that had to be a long time ago as the scars were varnished. The crux is the thin stuff right off the belay, then the pods up higher. Plan on doing one 5.9 stack move on soft rock at the very end.

I set the route up to rap with new anchors. I had planned to install chains on the summit, but alas spaced them (in the pack) and thus left a cordolette with biners. It seemed the pulls should have been easy, but I had a lot of drag, perhaps because the rope had slipped into the crack.

South edge and then east face of Aeolian Tower 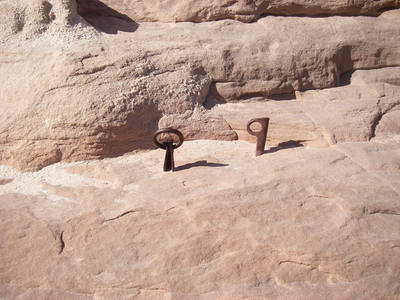 An anchor that leaves a lot to be desired. If w… 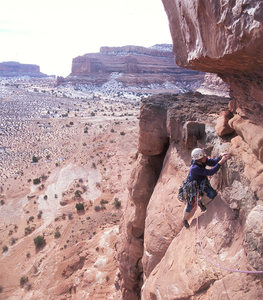 A pano shot that gives a good feel for what the… 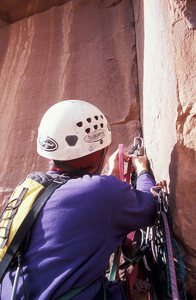 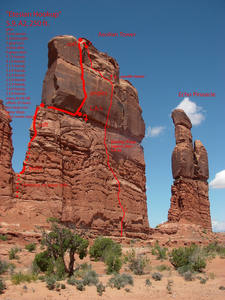 The line of Howling Winge on the east face of A… 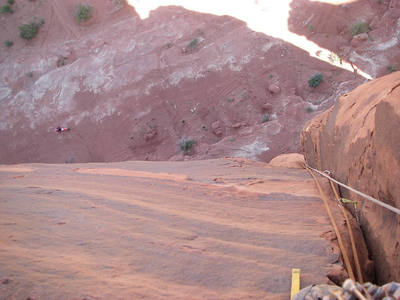 A couple dirt bikers who rode under me never lo… 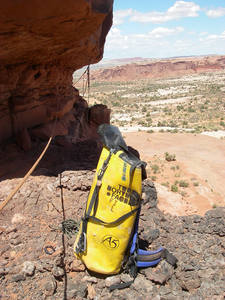 The ledge atop pitch 1 and the traverse of pitch 2 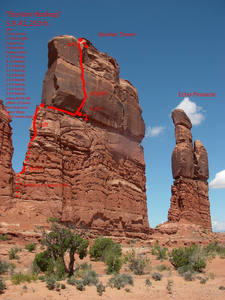