OK, I'll come right out and say that I haven't climbed the entire route. Even if I had been feeling 100%, we would have bailed anyway because a marmot was stealing/eating my partners hiking shoes and socks. That hike out would have been quite painful in climbing shoes...

This route is located well to the left of the Flying Buttress on an impressive concave wall that faces the Diamond. It's orientation means that it is shaded until early afternoon. We were there in the morning in the early season, and froze. In a period of cool stable weather, you can do something like sleep in, leave the trailhead at 9 am or so, and be climbing when the sun comes around.

P1. The first pitch (5.6ish) follows a right facing flake, then heads up and left following a corner system to a large ledge system. You will have to cross some snow to reach the rock in the early season.

P2. The second pitch follows some bolts through an impressive looking roof. Step left from the bolted anchor, and boulder up the tricky face to the first bolt. Get a TCU or two in under the roof, and then reach up and clip the bolt over the lip to the right. If you're onsighting this pitch, expect a solid to hard 5.11 effort, and remember to follow the holds not the bolts. I'd be wary of placing a larger cam in the roof itself. Once situated above the roof, follow the crack/corner/flake system up and left, then step right to a bolted belay on a narrow ledge. If you end up lowering back to the starting ledge from the bolt over the roof (either leading or seconding), you're in good company.

That's as far as I got, though I'm definitely going to go back and complete the job. The third pitch (5.11) begins to the left of the anchor - follow a couple bolts up the face, aim for an arch, pass another bolt, and head up right to the bolted anchor. The fourth pitch (5.10+) follows a conspicuous corner to the top of the wall and is apparently spectacular.

Per Josh Janes: P3: Again extend the anchor out left. Step up off the belay ledge and perform thin 5.10 moves past two bolts. Continue up and left on runout 5.9+/5.10- climbing to a rest ledge. Head straight up and out the right side of an arch and pass another bolt (difficult moves here). Wander up and back right on more run outs to a final bolt and cruxy move. Belay at a bolted anchor. 5.11- PG/R, 120'

Per Josh Janes: P4: Head straight left off of the belay and follow a discontinuous corner up to a roof below the obvious huge, hanging, right-facing corner at the top of the wall. Step up into the corner and climb it to the top. Coldshuts out left. This is an amazing pitch. 5.10, 150'.

You can rap from the top of P2 with a single 60M rope. Two ropes are required to rap the entire route, although the walkoff isn't too long. The approach takes a little longer than going to the Flying Buttress, and the talus is loose and trailess. FWIW, out of a dozen or so routes I've done in RMNP, I've only had trouble with marmots here and at the Flying Buttress (one ate a hole in my hat). 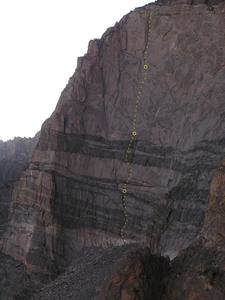 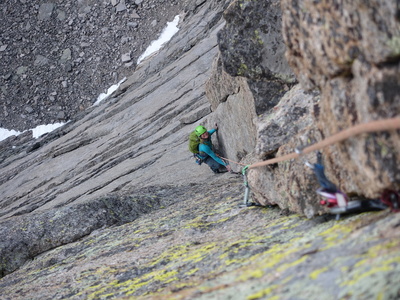 Dede in the P4 dihedral. 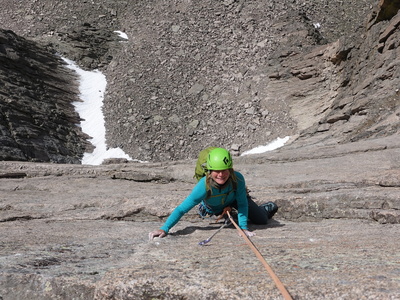 Dede at the second crux on P3. 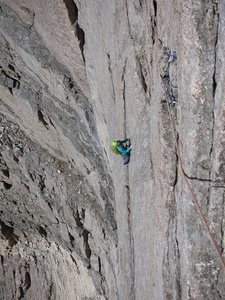 Dede heading for the first crux on P3.