Routes in The Outpost

The Outpost, in the general Rattler vicinity, is marked by a prominent chimney in the middle.

Park at the right (NW) turnout just downhill/E from the PSOM turnout. Head toward the cliffs/sm. side canyon (Laundromat, St. Valentin's, Chip, etc.) on the NW side of the canyon via faint trail (black arrow), concrete path, and trail. At the base of the hillside follow cairns up the talus and gully to a prominent slab on the left (St. Valentine's). A little bit further and up the hill on the right find a faint trail and cairns that lead up the hill for a couple of hundred feet.  Instead of continuing on this trail, cut left (at the point where the trail levels out and contours toward the Clifflet) and up the hill toward a cliff with a prominent 60' chimney in the middle (see pic). 0.8mi/25-35min. 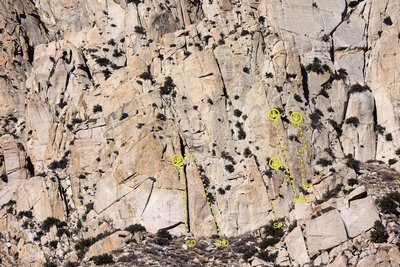 Overview of 'The Outpost'

All Photos Within The Outpost


More About The Outpost