Black Pyramid is an unofficial name that I use to describe the, um, black pyramid type peak looming above Sky Meadows. The summit register is labeled Rocky Crag (also unofficial). Anchoring the Mammoth Crest at the divide between Deer Creek and Coldwater Creek drainages, this is the shorter and less massive sidekick to Blue Crag. The north face of this 11,477-foot monolith arrests the eye and brings to mind a gothic cathedral, commanding a formidable presence above the Mammoth Lakes Basin. This face harbors a perennial snowfield that attracts the occasional backcountry skier, even in summertime. The spiky south ridge, vaguely reminiscent of a dragon spine, presents a thrilling culmination to Slayer and is itself a worthy 4th-class side-objective for those traveling across Deer Pass.

The closest access to Black Pyramid is the wilderness trailhead at the far back of Coldwater Creek Campground. See individual route pages for specific approach directions.

Black Pyramid is entirely composed of a unique metamorphic andesite from the Cretaceous - a volcanic counterpart to the beloved granitic Sierra Nevada batholith not unlike the rock of the Minarets. It is one of the most significant volcanic units in the Mount Morrison roof pendant, representing the most important stage in the creation of the Sierra batholith. The same layer that makes up the dark, jagged peaks of the southern Mammoth Crest, is extremely dense and glacially polished. Parallel cracks offer solid cam placements while angular holds reminiscent of basalt jugs get you through the numerous bulges. 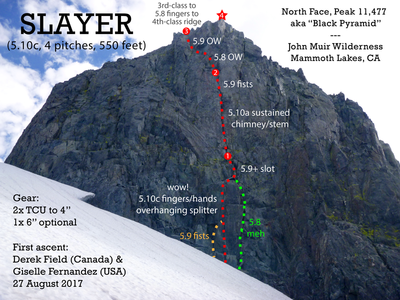 All Photos Within Black Pyramid