This is by far the most developed climbing area in the country, as well as the most extensive in all of Central America, with around seventy routes and potential for more first ascents (particularly for those who can climb hard!). The difficulty of the routes oscillates between 5.5 to 5.13b, but the majority are harder than 5.10. There are also a handful of projects in progress that no one  visitor nor local  has been able to complete (not that there has been a long line).
This site is located in the municipality of Panchimalco (but not in the town itself), 30 minutes south of the capital city. Due to its easy accessibility, the area is often quite crowded on the weekends when many people come to eat, hike on the trails, and enjoy the cooler weather as well as the views of the city, the ocean, lakes, and volcanoes. However, dont think that means there will be long lines at the cliff; climbing hasnt really taken off yet in San Salvador, so youll be lucky if you see more than one other group climbing.
Historically, this place has been alluded to in many legends and mythical stories. Among them is the name, Devils Door, which comes from the curious formation of the two large rocks separated by an abyss, which cuts the mountain in what appears to be a giant door that opens to the beautiful countryside below. Among villagers in the area, there has long been a belief that those who try to do construction in this zone find that strange things happen at the work site, leading to an affirmation that there is an impenetrable force that blocks the human hand from altering the area. This same devil has been blamed for other such extraordinary events, depending on who you talk to.
The popular Puerta del Diablo is a symbolic tourist site, still considered to be more or less within the realm of the capital. Its primary characteristic is a relatively fresh climate that prevails as one ascends to the three boulders that comprise the site. Its original name is Naked Peak because many years ago it was only one rock, one summit. According to local accounts, after a storm in 1762, much of the soil was taken away and the land remained permanently changed due to these natural forces. Today, the resulting three main boulders are now locally called the Naked, the Little Naked, and the Big Naked (the translations are a bit rough as English doesnt have diminutive forms).
From those three main features visitors are afforded an impressive 360-degree view: the capital of San Salvador, Lake Ilopango, Turkey Hill of Cojutepeque, the imposing volcano San Vicente  better known as Chinchontepec. You can also see the picturesque village of Panchimalco and the skyline to the south where the Pacific coastline runs as far as the eye can see  all from an altitude of 3,700 feet.

To arrive on public transportation from the center of San Salvador, take Route #12 with the destination Parque de la Familia and los Planes de Renderos and get off at the stop for La Puerta del Diablo. The cost should be less than 50 cents. In car, take the Comalapa Highway towards the airport, and shortly after passing El Jardin de Recuerdos (a cemetery on your right), take the right exit towards los Planes de Renderos and Panchimalco. At the end of the exit ramp, bear left to go uphill. Stay on that road, driving up the hill overlooking the city for about 12 kilometers. When the road levels out, you will come to a junction with the statue of Saint Francis of Assisi; take the right turn towards Parque Balboa, not towards Panchimalco, and continue past a church, around an obelisk in the middle of the road, past the entrance for Parque Balboa, and up five kilometers more towards La Puerta del Diablo. The parking lots will be on the left, and you will also clearly see some of the cliffs to your left as well. It is nearly impossible to miss because there is a lot of activity and the devils door itself is visible from the road. If you continue on that road, it will take you on a newly paved road to the tiny town of Mil Cumbres, where the drivable road ends. 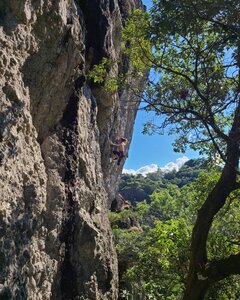 All Photos Within Puerta del Diablo