A relatively long hike to a forest full of boulders. This area is mostly undeveloped and many good problems have yet to see ascents. On the 30 foot tall Crack House boulder there are scary highballs and steep cave problems. There are many other good boulders within a 5 minute walk with some high quality, shorter problems. There are at least 20 good boulders in the vicinity, mostly unclimbed.

Park at the Freshwater Bay trailhead. Follow the trail to the bay then along the west shore of the bay to an east coast trail sign that reads Ft. Amherst. (~40 minutes) Do not follow the sign, take the right fork in the trail, continuing along the shore of the bay until reaching a sign that reads Gunners Cove (~10 minutes). Hike along the coast past the first cove along flat rocks, until reaching a large flat boulder with a stream running underneath it. Walk up the stream until the giant boulder presents itself (~3 minutes). 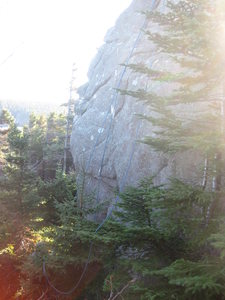 All Photos Within Gunner's Cove