Harts Draw; AKA: Little Italy Canyon is the major canyon lying between Indian Creek Canyon and Highway 191. The climbing is classic Wingate Sandstone. Hart Draw is public-owned land managed by the BLM.

In 1859, Harts Draw was first accessed by contemporary humans as the route Captain Macomb took to discover the area that is now Canyonlands National Park. Petroglyphs in the area indicate the region was known before this discovery. In 1881, the Native Americans of the Pinhook Creek Massacre, who were fleeing a posse of ranchers, used Harts Draw on their route prior to sneaking up and dispatching their pursuers. Since then, the area has been utilized for livestock grazing, uranium mining, and recreation.

Harts Draw has been part of the battleground between resource developers and wildlife conservationists. Multiple attempts were made to establish large national parks that would have incorporated Harts Draw, but the 1964 legislation creating Canyonlands National Park did not extend to the area. In the 1980s, Hart Draw was identified as a railroad route for a proposed nuclear waste dump, which was ultimately rejected. The prospecting roads of the area have been minimized, but off-road vehicles still frequent the area. The numerous side canyons of Hart Draw offer exploration, wet riparian habitats, and even a few arches.

Safety: Safety Trumps Leaving No Trace in this Area. You will find hangers on bolts.

Take the 2-track opposite the entrance to the Super Bowl campsite north and eastward into the mouth of Hart Draw for 10 miles preferably using a 4WD of some clearance. There are only 2 sometimes serious crossings and these are on the 2 big side streams. Many times I did not put the Ford F150 into 4WD coming or going. Only once did I get stuck with 4WD capabilities. That was in the 2nd steep dirt ravine. Scarpelli drove his little 2WD PU in many times at a fast clip in some places. He also got several pulls outs from us.

I suggest that you bring a shovel, a pick and a bar. Sometimes you have to work on the road after a good wash stimulating rain. 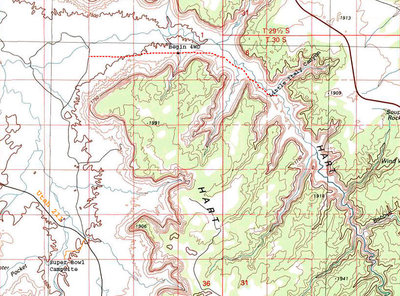 Map to central Hart Draw Parking at the end of… 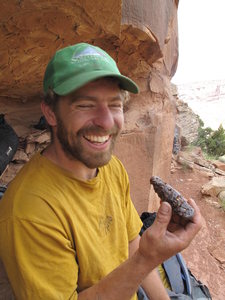 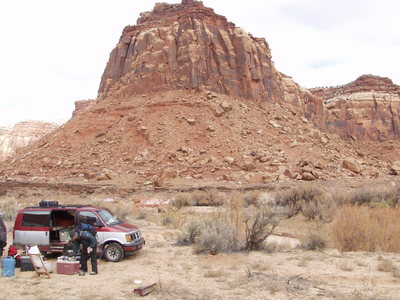 In the middle of Hart Draw

All Photos Within Harts Draw