Routes in The Siren

The Siren is a wild and intimidating 300' tower located in an unnamed side canyon in Desolation Canyon. At first glance the rock quality looks very poor, but it cleans up well and we were really impressed with the quality of the rock and the climbing. The summit is very overhanging on all sides.

I first saw this tower while on a river trip I took back in 2006. We named it the Siren because it has been calling to me ever since.

Float the Green River through Desolation canyon to Mushroom Camp at approximately river mile 69. The camp is on river right about a half mile below Jack Creek rapid at a beach below a big double trunked Cottonwood Tree. The tower is briefly visible from the river way up a side canyon just before the camp site.

From the camp, walk 10 minutes or so up to the cool mushroom shaped rock, which has some lovely petroglyphs. The tower is visible in the side canyon on the left. Walk an hour up a nice gravelly wash to a dryfall that stops progress. Here, you can either directly climb the dryfall via a highball boulder problem, or attempt to scramble up loose exposed rock on either side. Bypass a second dryfall by scrambling on ledges to the left, and then make 3rd class moves to climb a third dryfall. There are two fixed pins at the top of the first dryfall to rap from on the descent.

The tower is obvious after climbing out of the third dryfall. The approach takes two to three hours depending on how long you take getting around the dryfall. 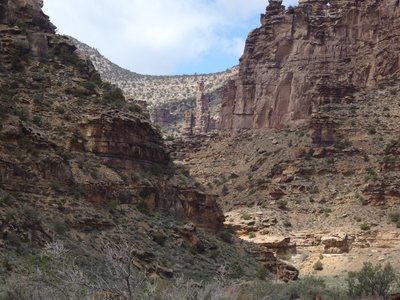 The Siren as seen from Mushroom Rock 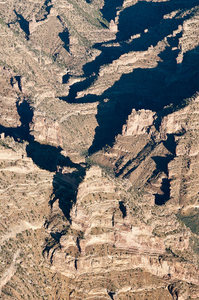 The Siren from the air. The tower is in the upp… 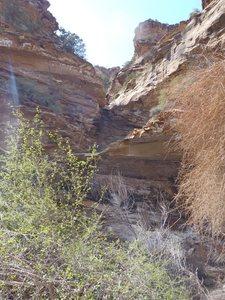 The first two dryfalls on the approach

All Photos Within The Siren


More About The Siren