Yushan (meaning Mt. Jade), 3952 meters above the sea level, is the highest mountain in Taiwan, a tropical island in west Pacific.

Despite of being on a tropical island, in the best winters (Nov-Apr, but seeing better chances in Feb-Mar) the faces of the mountain above 3000m are packed with ice and snows and there would be some great alpine climbing routes, but in other bad winters, there could be not a trace of snow. As high as nearly 4000 meters above sea level, it is typical when very strong cold waves strike in very good winters to see -5 ~ -15 degrees Celsius, and, 100% humidity, and, very strong wind, where people could feel it is as cold as -20 ~ -30 degrees or even colder. On the other hand, it could be very sunny and dry and no wind, where people would find themselves hanging on thinner and thinner ice shield with water running underneath or feel insecure snow slope where you are virtually icetooling on rock walls with a very thin layer of soft snow. Climbing early before sun rises and climbing fast may save your days.

In summers, rock climbing routes are also available but the rock quality and protections of some sections are very poor. Test your holds before you weigh on them.

The protections (rock or ice) in some sections of the routes in this area are often very poor. I would have rated as R or even X.

Some of the technical routes in the area could have been climbed in 1930's the years of Japanese ruling before the end of WWII 1945. However, during the time of Taiwanese government transition after war, all the Taiwan Alpine Club records were destroyed in 1947 after the infamous 228 holocaust. Many modern FA of the technical routes (which we can find report) were in early 1980's.

Another style of sport in this area called "Alpine Running" is also viable. People run from Dongpu trailhead via Yushan summit to Tataga trailhead in one day with only minimum food and water in summers (running trail about 40km long, elevation changes from about 1200m ~ 3952m ~ 2600m, typically it takes 3 days of hiking for regular hikers), also a very good training for alpine expeditions.

Within half a day of driving from any major cities in Taiwan via highway 18 (from Alisan, Jiayi) or highway 21 (from Shuili, Nantou) to Tataga trailhead or Dongpu trailhead.

Typical climbing style in this area: hiking from either trailheads with all your camping and climbing gears to one of the base camps. and from the base camp, you may climb light and fast each route a day.

Base camp approaches:
. Paiyun hut. It takes one day of hiking to Paiyun hut from Takaga trailhead. It is good for all the climbs in this area except the routes on south summit (maybe routes on east summit a little too far away too). From here it takes within 3~6 hours (depending on snow conditions) of approaches for all the routes. you can leave your tents at home if you choose Paiyun hut as base camp but it would take longer for approaches for each climb (ie 3~6 more hours of approach each day).

. Yuanfeng (meaning Round summit) shelter. Near the south col of Yushan main summit. 2~4 more hours of hiking from Paiyun hut. In winters with all your winter gears, it is not easy to get Yuanfeng shelter in one day from Tataga trailhead. You can leave your tents at home if you arrange to live in Paiyun hut and Yuanfeng shelter. It is good for climbing routes on south summit and the south ridge and south face of main summit.

. Laonong stream camping site. It takes 2 days of hiking from Dongpu trailhead. It is good for all the climbs on the north faces of main summit and east summit.

. The north wind gap. Unsorted camping site in the forest near the north wind gap. 3~6 more hours of hiking from Paiyun hut or 2~3 more hours of hiking from Laonong stream camping site. The camping site is small so only good for small parties. Lack of waters if no packed snows. It is good for all the climbs on the north faces of main summit and east summit with much shorter approaches than from Paiyun hut.

. The weather station on Yushan north summit. Virtually impossible unless you have some strong government official connections. About 2 more hours of hiking from north wind gap. 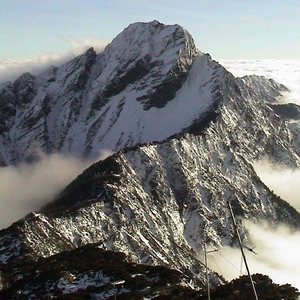 Yushan, the highest mountain in Taiwan, sees a… 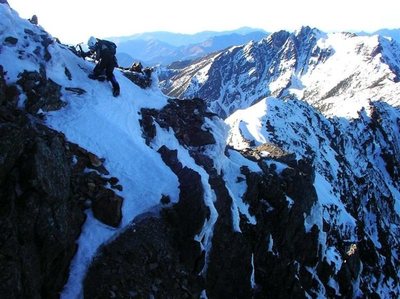 All Photos Within Yushan