This crag is archeologically sensitive, with petroglyphs and other remnants of ancient cultures.

These are a series of mostly west-facing crags above the city of Tulancingo. There appear to be at least 15 bolted routes, with more development potential. Bolted routes appear to be generally under 30 meters, though one is about 35 meters. There is also lots of crack climbing, both bolted and not, from fingers to off-width. Cracks appear to take good gear. Rock is basalt, fragmented. Rock quality is sometimes poor, especially at the bottom and top of the crags.

A guidebook is being created for the State of Hidalgo which will include Tulancingo. I'm only adding the routes that I have climbed. The ratings are consensus ratings from the local climbers, which I can confirm.

Access is easy. The crag is 10 km. NNE of the center of Tulancingo. You can take a taxi or "micro" to the "Huapalcalco Pyramid." Watch for the sign on the right that says "Z. archeologica." Walk five minutes up the drive towards the crag to your east. 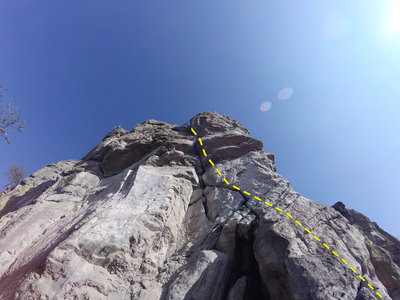