The sandstone spire of Mount Hayden, perched over Nankoweap canyon, tops out at an elevation of 8372 feet. It's dramatic profile is one of the most often photographed scenes in Grand Canyon National Park. It is also very likely the most often climbed summit in the park by technical rock climbers, no surprise given the obvious appeal of it's lofty summit. It is a special experience to reach the pool table flat summit of Hayden, and gaze into the depths of the Grand Canyon, far below.

The peak is named for Charles T Hayden, an Arizona pioneer who originally came to the state in 1858 on the first overland stage to Tucson. He was called the "father of Tempe" after establishing the first store there in 1870, as well as constructing and operating the first flour mill. The mill still exists. Father of US Senator Carl Hayden.

There are several routes (all technical climbing) to the summit of Mount Hayden, the most popular of which is the South Face (5.8) route, a moderate challenge for most climbers, once the approach to the peak has been done. There is also the harder Pegasus (5.10+) route on the east side if you're looking for a bigger challenge.

Virtually every climber will tell you that the crux of any climb on Mount Hayden is the approach. Getting down the loose and rocky slopes to the climbs is a struggle to say the least. There is a detailed description on this approach included in the comment area for the South Face route on Hayden.

The peak is accessed via Point Imperial (8800 feet) off the North Rim of the Grand Canyon. You can reach Point Imperial by driving south from Jacob Lake until you reach Fuller Canyon Road/Cape Royal Road (approximately 3 miles north of the north rim lodge), the road forks at about 5 miles. Take the left fork about 3 miles to Point Imperial. From the lookout, you can't miss Mount Hayden. 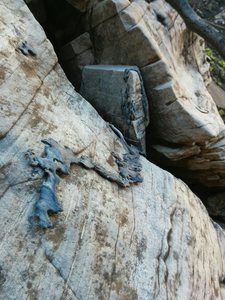 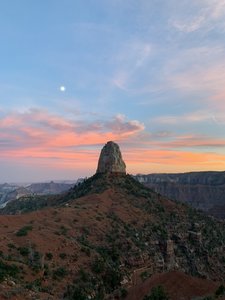 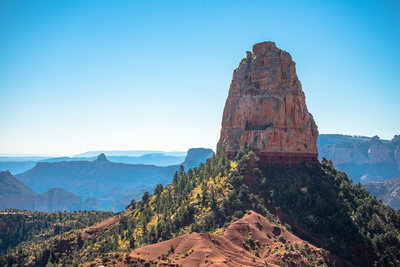 Hayden from the approach 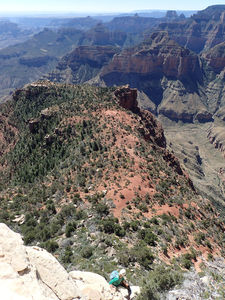 All Photos Within Mount Hayden