A short rock containing two bolted lines on some beautiful, glassy quartzite. There is a toprope anchor on the west side and chains for two bolted routes on the east side.

A feature on the top, south side looks like an open-mouthed snake head when viewed from downslope and southwest.

It is really a shame this outcropping isn't taller. If it were 60 feet tall these routes would be classics.

Note: The rock below the anchors for the bolted routes is remarkably sharp. Better to rappel than lower.

Take the trail north from the Rock Canyon parking lot. When the wide, gravel path narrows there is a dirt road that branches up and right. Take the dirt road for a couple of hundred feet and then hike up the gully. 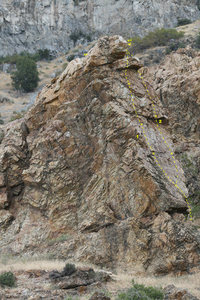 All Photos Within Snakehead