Routes in The Needle

Effective 8am, May 19th, 2022, the Cibola National Forest has issued a stage 3 (full closure) fire restriction order for the Mountainair, Mount Taylor and Sandia ranger districts. The order can be found at fs.usda.gov/Internet/FSE_DO…
The order is effective until December 31, 2022 or until rescinded earlier. Before you climb in any of the Albuquerque areas, you are encouraged to verify the land management status of the particular area to ensure it is not within the closure order area. The MountainProject forum thread at mountainproject.com/forum/t… does a good job of detailing what is closed and what is open in the state of New Mexico.
A map of the Cibola ranger districts can be found at fs.usda.gov/Internet/FSE_DO….

The Needle is a major feature on the west side of the Sandia Mountains near the north end. Aptly known in the past as The Pyramid, The Needle stands just south of The Shield. The Needle is known for some arduous approaches and long routes. Plan your climbs with care.

Generally speaking, climbs on the south and east sides are initially approached starting from The Crest, hiking to the saddle at the east side of The Needle, and continuing on approach as needed from there; Mick Schein's guide "Sandia Rock" describes this approach for the case of the Southwest Ridge Route. Climbs on the west side may be approached by hiking up the Movie Trail passing to the south of The Prow and then scrambling to the base of the Needle.

Also, visible from Albuquerque is a partially tree-filled ramp that roughly divides the west face of The Needle into an upper and lower half. This ramp is known as Fifth Avenue and may serve as an exit from the lower routes, as an approach to the upper routes, or as an escape from planned outings spanning the west face.

One Way to Descend from the Summit

In a comment to the SW Ridge route, Daniel T. mentions a ramp from which there are a couple short raps into the ravine that runs along the south side of The Needle. Here's how to get to that ramp.

From the summit head east-ish and down hill through pine-needle duff amongst the trees. Work you way to the 'crown' in this direction by trending slightly north as you head further down and east. Eventually, you will need to drop to skier's left of the 'crown' which is now turning into a ridge that heads east. If you miss the drop to left then back track a little (i.e., no down climbing at this point).

Continue down and east-ish on very easy ledges staying within 20 feet or so of the now well-formed ridge. Within minutes you will reach a minor saddle between the main summit block and a small rock tower to the east (50 feet tall?). Locate a ramp down below on the south side of this saddle. Down climb ~20 feet to the ramp. From there, it's another 20 easy feet or so to a tree with rap slings/rings.

There are two relatively short raps, both from trees, with a short scramble between them. However, if you continue on rappel from the first rap tree to the second then you may want to knot the ends of a 60 meter rope.

Classic Climbing Routes at The Needle

Mountain Project's determination of the classic, most popular, highest rated climbing routes in this area.
More Classic Climbs in The Needle »

Sun Angles Details:
Routes Mostly Face: South
Sunny Roughly 10am to 5pm during high season
6am
8pm
Details: The main Sandias massif does give this formation some shade until late morning. 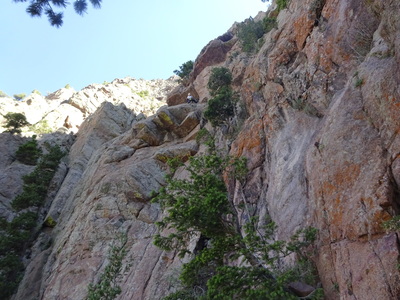 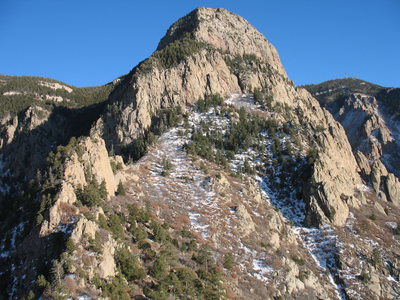 The Needle, west face, from the top of the Prow… 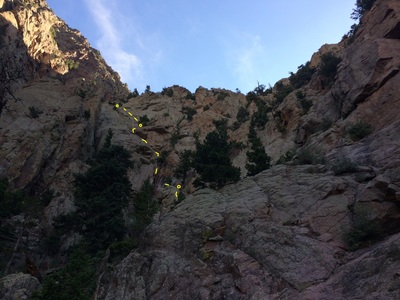 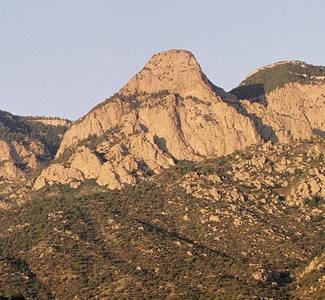 The Needle about an hour before sunset.

All Photos Within The Needle


More About The Needle