Cecilville Slab aka Cecil Rock currently has 8 different sport routes and 1 trad climb that range from 5.8 to 5.10. Cecil is a great place for beginners looking to learn how to lead sport climbs, and or those who just want to hone their skills.

Climbs usually get sun most of the mid day through the late afternoon. If it rains the night before, you may want to give the rock a chance to day and climb sometime after 12:00pm.

From I-70, take the Copper Mountain / Leadville exit 195 to US Hwy 24 South. Travel about 5 miles from the Summit of Fremont Pass. Pass the Climax Mine on your Left. Once the road starts to level out Start looking on your left for large zip-line towers and a sign that says "Top of the Rockies Zip Line". Take the main entrance road and park in the first small lot on the left before reaching the large building. White Mountain Snowmobile Tours is further along the same access road, providing the best GPS destination to direct you to the crag.

*The rock is on public land but make sure you park as close to the path as possible, making sure you do not block the residents that live at the ranch. A very short approach has a clear path and two z-channel steel members bolted together to cross the stream without getting wet.

One user of the website noted: he/she used to live at Colorado Belle Ranch in the late '80s while lift opting at Copper. The slab was directly outside my kitchen window, and I used to watch my neighbors dropping the rock on skis during the winter while I was washing dishes not 50 feet away!

As well the name of the slab comes from the nickname of the ranch. It is called "Cecilville" by the locals named after one of the past owners (and my landlord at the time) Cecil V. Clifford. Cecil was missing all his fingers except for his thumb on his right hand. He told me he lost them in a mining accident when a mine car somehow rolled over his hand.

This is just one of the many strange, bizarre and interesting memories I have of my winter in Cecilville.

I just had to tell you after googling Cecilville and came across your page. I didn't know that it was a popular climbing site! Thanks for resurrecting some fond memories! 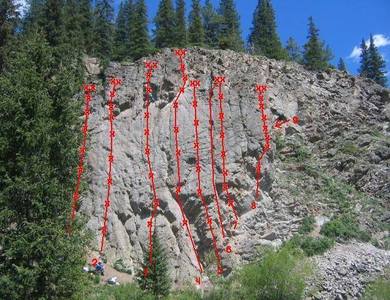 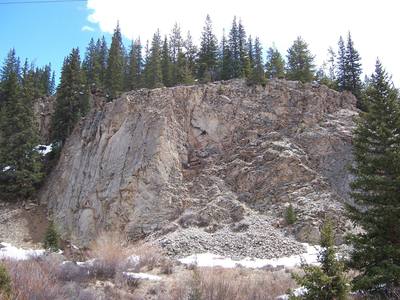 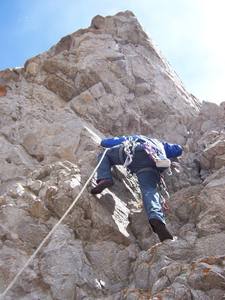 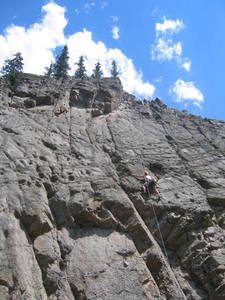 All Photos Within Cecilville Slab aka Cecil Rock