Climbing in the Gorge is currently illegal according to Canon City Municipal Code 9.44.080 and is allowed only by the express permission of the Royal Gorge Company.

Camping is available upstream on BLM land along the Arkansas River with the boaters. Access into the canyon is free, although a sticky issue. The railroad tracks and bridge are private land. The actual walls though are a Canon City city park. Don't touch the bridge. Nearby Canon City has plenty of good restaurants and places to buy beer.

Adventure climbing at its finest.

There are two approaches to The Royal Gorge. Both are off of US Hwy 50, about 8 miles west of Canon City. The first is a third class descent down a gully starting just outside the concession area. The second is a 2 mile walk down the train tracks after crossing the river from the Parkdale South Fishing Access, off Fremont County Road 3. 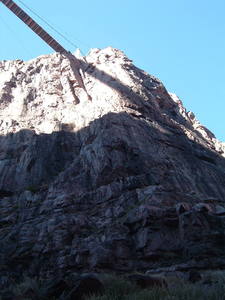 All Photos Within Royal Gorge