Route Information
3 pitch variation of raven Steals The Sun. Daisy was named in honor of a furry friend who passed. Daisy scoped the lines on La Vista with me before Ravens was completed. A fake flower somehow appeared on my rope stack during the FA. It just so happened to be a white daisy. I figured my old pal was thinking about me. I planted the plastic daisy in a crack and thought of her. So after special consideration I think it would be great to name this route Daisy in memory of my little sissy dog.

Pitch 1 Climb the fun left facing dihedral that goes straight off Living Room Ledge up to a stance and fixed pin. Climb up past a bolt to another pin below the crux. Clip another bolt and climb up through a steep bulge ending with a mantle 5.13. Climb up to a thin flake and traverse left to a stance. Creative (don't be "single" minded), but solid gear gets you up to another bolt and a crack feature. Crank some 5.12 moves to a stance then up and left to the sweet belay ledge.

Pitch 2 Climb straight up through an awkward mantle and 2 fixed pins. 5.10/11. Continue up a left facing crack/flake through another bulge ending on a sweet stance below a series of roofs. Passage is allowed by working up through the big roof past a bolt escaping through the roofs on their left side to a belay stance.

Pitch 3
Climb up past 2 bolts and then up above the belay 5.10. Go straight up directly to top and belay off the pine tree.

La Vista is located at the southeast flank of Echo Canyon South of Yucca Flower Tower. The routes are reached in two ways. One option is to descend Echo Canyon via the climbers trail for Techweeny, Bushshark etc... but go south past Yucca Flower Tower until a large left facing dihedral is visible near the top of the wall. Locate a smooth slab with a seam cutting the center at the base of the wall. This is Raven Steals the Sun. A second approach and maybe more desirable approach is to rappel into La Vista via Raven Steals The Sun (see description) or rappel Daisy.

The crux is locating the summit of the routes. From the major bend in the La Luz trail walk out to La Vista overlook. This is an open grassy area with a small stone wall that makes a great viewing seat. From here head down a faint trail towards Echo Canyon. Once you are at (what appears to be a big Gulley heading towards the tram) stay high and go south keeping the tram at about 9/10 o'clock. A notch is down climbed through the rocks straight in front of you at this point. You find yourself in another notch after the short downclimb. Go uphill towards albuquerque and gain an obvious summit point. Head south along the edge scrambling onto a saddle down in a notch. At this point there are gulleys on the SE side of the saddle and one that cliffs out on the west. The saddle offers a nice shaded flat spot to rack up and leave the packs. The top of Daisy is maybe 15-20yds NW of the saddle. We scrambled down the exposed edge to the medium sized pine tree. We left red webbing on the tree. Also the top-out for Raven Steals the Sun. How-ever the rappel for Raven Steals the Sun is located about another 25-30yds NW from this tree. The rappel for Ravens is a fat trunked tree right on the edge.

Daisy can be rappelled with a single 70m rope. You will need some webbing or cordelette for the belay of the last pitch. Daisy starts from Living Room Ledge or descend down the large gully to the base of the wall and climb the first pitches of Raven Steals the Sun for a bigger outing. Beware that it cliffs out when descending the gully from Living Room Ledge and you will need to rappel from a good tree with a single 70m rope to reach the ground.

RETREAT
The line was established ground up taking whips on the crux over a hand-full of days. There was how-ever one bolt that was added on rap. We used the big gully one too MANY times to retreat up and out of La Vista while working the route. The big gully is one way to retreat, but is not recommended unless you are familiar with Sandia scrambling. Ascend the large gully (east) from Living Room Ledge being careful not to roll the big chockstone/boulder on yourself. At the saddle scramble up (north) and to the summit of La Vista. Be careful of rotten stone. A second retreat is to rappel back into Echo Canyon and hike up (north) to the La Luz.

Gear
Sandia Trad Rack consisting of one set of wires. One set of RP's. Small cams (such as C3's) to a BD #2. #3 optional for pitch 2 of Daisy. Bolted Belays. SW facing, lots of exposure to elements so watch out for thunderstorms. Still no super human powers to report Jason. 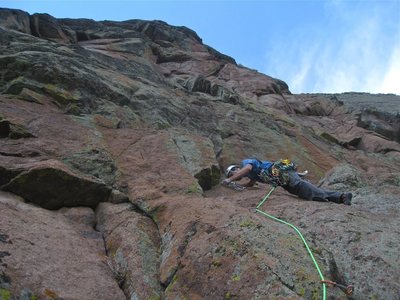 Brad Ellen casting off on the 5.11 pitch of Dai… 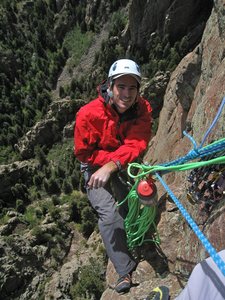 Brad Ellen belaying the last pitch during FA of… 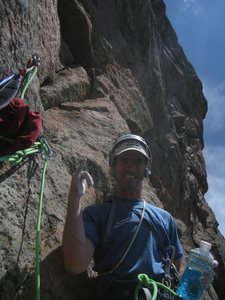 Brad getting psyched for his pitch!! During FA… 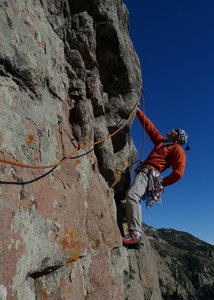 The photogenic start to pitch 3. 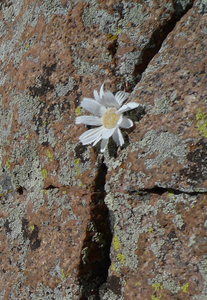 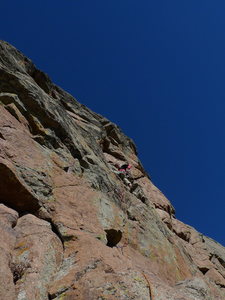 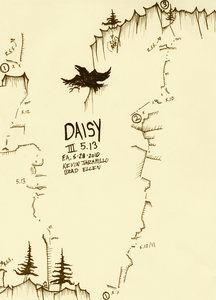