Located 5 miles south of Lewiston, Idaho near Hells Gate State Park. Climbs are on beautiful columns of canyon-filling Pomona flows of Columbia River Basalt overlooking the Snake River. Rock quality varies, but the best routes are solid and fun. Most routes are around 1/4 rope length. The walls are facing almost due south, making ideal 3-season climbing (late September to early June), in the relatively balmy climate of the Lewiston-Clarkston valley. Summers are hot (most days are near or over 100 degrees).  None of the routes can be reasonably accessed from above to set up top ropes because the slopes above the cliffs are steep and loose. The usual cautions apply here: loose rock, rattlesnakes, and poison ivy.

As with the rest of the LC Valley, we have a spider season that runs from about mid-July through mid-September. The spiders are big, scary, juicy, and completely harmless orb spiders. They leave webs and egg nests all over the rock. Put your fingers into an egg nest and you're greased with orange goo. But have you ever wondered whether, if you were to stick all that webbing on your hands, you could climb like spider man/woman? Here's your chance to find out.

There's one more really unique thing about Hells Gate: The Snake River floods in the spring, meaning that the base of climbs are under a few inches to a foot or so of water in full-flood. All routes are accessible below 80,000 cfs measured on the Anatone gage (https://waterdata.usgs.gov/id/nwis/uv/?site_no=13334300&PARAmeter_cd=00065,00060,00010). At 90,000 cfs, the base of many climbs on the east side are flooded. At 100,000 cfs, the eastern side of the west side floods. Note that most photos that follow were taken on a day when gauge was reading 110,000 cfs. Only upper west side is completely flood-proof.

Drive 5.3 miles on Snake River Avenue-Tammany Creek Road from Lewiston (1.3 miles past the entrance to Hells Gate State park) to the Corps of Engineers parking lot for Hells Gate Habitat Management Unit. Parking is free and there are bathrooms. Hike 1.5 miles on trails in the management unit down to the river, then east(upstream) on the river trail. Grassy slopes give way to cliffs and spectacular basalt columns basking in sunshine… well, ok, most of the time. 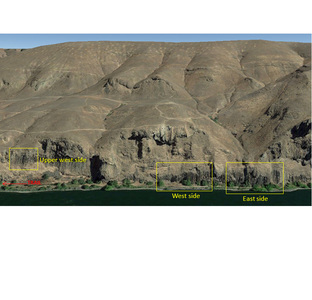 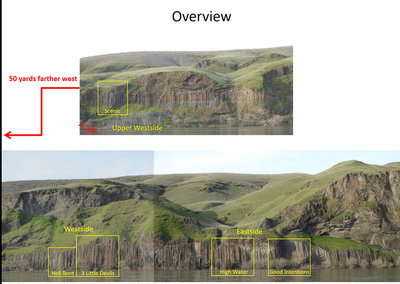 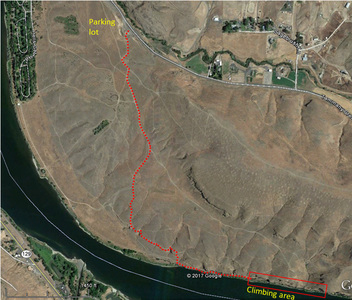 All Photos Within Hells Gate