Dixon Springs State Park is one of several state parks in the Illinois Shawnee Hills. The park is on a giant block of rock which was dropped 200 feet along a fault line that extends northwesterly across Pope County.

"Bold cliffs and crags overhang a bubbling brook while large boulders, overgrown with ferns, lichens and moss fringe the hillside. Giant century-old trees interlock above the small creek as cliffs rise on either side and huge boulders are scattered through the valley. The principle canyon has walls nearly 60 feet high with a long, narrow passageway." (Illinois Department of Natural Resources).

Dixon Springs State Park is a unique area in Southern Illinois. You will not find a more meticulously clear and approachable destination in Illinois. Freshly cut grass, permanent grills, picnic tables, all combined with a super short approach make this area the most relaxing place to boulder. Pack a bunch of friends and crash pads into a car and head out to Dixon Springs to test yourselves on some of John Gills old boulder problems. Dixon contains one of John Gill's hardest problems Rebuttal V8 (proud send for the 1960's), and many other fun problems.

So if your feel like venturing somewhere new while barbecuing and bouldering then go enjoy yourself at Dixon Springs.

The area around the park was occupied by various tribes of Algonquins who, after the Shawnee had been driven from Tennessee, settled near the mouth of the Wabash River. Dixon Springs was one of their favorite camping grounds and was called "Kitchemuske-nee-be" for the Great Medicine Waters.

One of the better-known Indian Trails, which the early French called the "Grand Trace," passed to the west of the park and south to Fort Massac, then branched out into lesser trails. Much of the "Grand Trace" is IL Rt.145, one of the most scenic highways in the state, running nearly all of its length south from Harrisburg through the Shawnee National Forest.

This section of the state was part of an Indian Reservation occupied for a time by about 6,000 Native Americans. Like the buffalo, most of the Indians were gone by the early 1830s.
Dixon Springs takes its name from William Dixon, one of the first white settlers to build a home in this section, who obtained a school land warrant in 1848 from Governor Augustus C. French. His cabin was a landmark for many years as was an old log church on the adjoining knoll.

Dixon Springs became a 19th century health spa, which attracted hundreds to the seven springs of mineral-enriched water. A bathhouse provided mineral or soft water baths, hot or cold, available at any time. The natural beauty of the area and its interesting stone formations helped to give the park valley a more equable temperature in the summer than most of southern Illinois. This made the resort so popular that people came to Golconda by steamboat excursions from as far away as Paducah, KY, Evansville, IN, and Cairo. From Golconda they then traveled by train to within a couple miles of the park.

facilities at the park include a modern swimming pool, bathhouse and 45-foot water slide provided for swimmers' enjoyment. A lifeguard is on duty at all times. Towering oaks, elms and birch trees shade the pool. A concession stand near the pool provides a variety of refreshments.

The best climbing resource for Dixon Springs is Matt Bliss's book Sandstone Warrior. His guide covers 21 of the most classic problems the park has to offer. Pick up your copy at Shawnee Trails located in Carbondale Illinois.

For any other information on the park refer to: dnr.state.il.us/lands/landm… 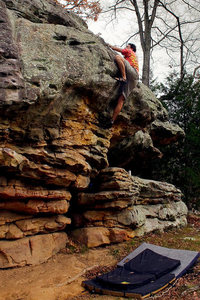 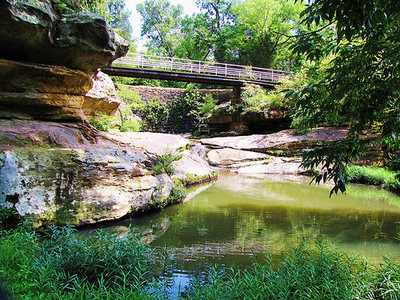 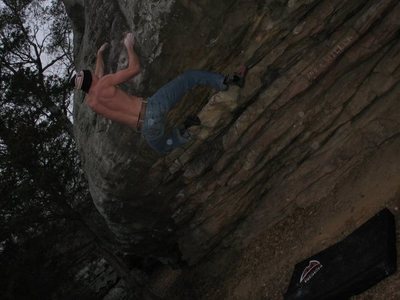 right off the road