Ryan Sayers was killed in June 2003 while climbing Steeple Peak in central Wyoming. Cause of death was lightning. Sayers was a double major in math and physics at the Colorado School of Mines in Golden, Colo. He was 20 years old. -ed. 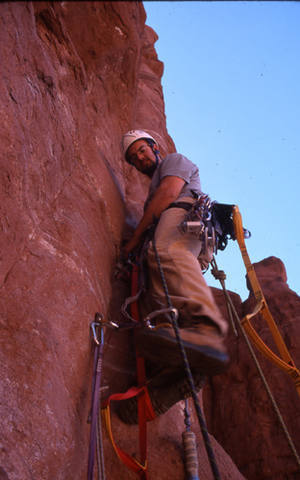 From the Colorado Springs Gazette, Jun 21, 2003:
Ryan Sayers, 20, died June 16, 2003, after being struck by lightning while climbing in the Wind River Mountain Range in central Wyoming.

Ryan graduated with honors from Rampart High School in 2000. He was a gifted mathematician and physicist, receiving multiple awards in a variety of math and science competitions throughout his school career He wrote and produced many off-the-wall school and climbing videos, and acted in two community plays.

Ryan attended the Colorado School of Mines in Golden, and planned to graduate with degrees in both Mathematics and Physics. He conducted cutting-edge research while still an undergraduate. His primary interest was theoretical math, and he independently studied topics such as topology and number theory. After graduation, he planned to join his brother Jack at Cal Tech to earn a PhD in theoretical mathematics.

Ryan had a passion for rock climbing, making numerous trips across the southwest to complete many challenging technical routes and bouldering problems. He mentored many novice climbers, and took great delight in introducing others to the sport. He enjoyed hiking and camping, and spent as much time as possible outdoors.

Ryan had a gift for making people feel at ease, for teaching, and for finding the light side of almost any situation. He will be most remembered for his loyalty, kindness, intelligence and eccentric humor. His family misses him dearly, and will never be able to fill the void of his absence.