Grassy Crack is a visually striking, deep crack system that runs more than 1,000 feet up the central portion of Haystack's west face. This is likely its best attribute as the climbing is just so-so. Regardless, it is a fun adventure that offers a bunch of mileage without feeling too committing.

From near the base of the Grassy Goat Trail, scramble up a bit of class 4+ slab to a grassy ledge on the right. This is the same starting point as for Central Corner. The climb can be done in six pitches (all 180 - 200 ft). Two slabby pitches up discontinuous, grassy cracks lead to the bottom of a large chimney. Climb the chimney system for four more pitches until scrambling terrain is reached, sometimes opting for more pleasant rock on the sides. Near the top where the chimney envelopes you, climb through the overhang to easier ground above.

To descend, scramble upwards for a few hundred feet and then traverse left to the top of the Grassy Goat Trail.

The obvious deep crack on the center portion of Haystack's west face. It is between Railroad Tracks and Central Corner, and like those two routes is accessed from near the base of the Grassy Goat Trail. 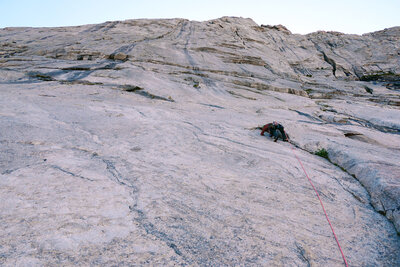 Starting up the first pitch. 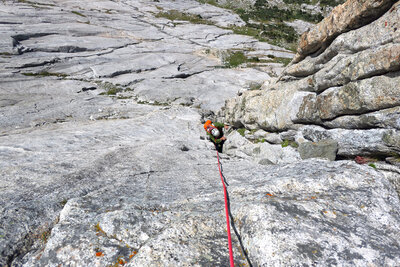 Looking down our 3rd pitch, the first one along… 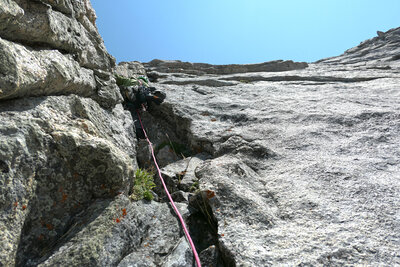 Start of our 4th pitch. 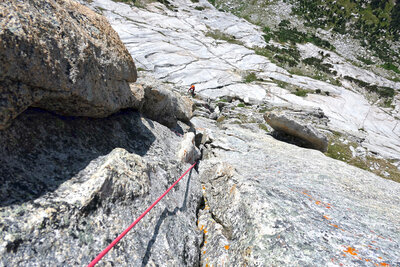 Looking down our fifth pitch from our belay jus…