The National Park Service asks that climbers choose not to climb the Tower during the month of June. The June voluntary climbing closure was selected as part of the Devils Tower Climbing Management Plan by a working group that included two climber organizations, two American Indian organizations, and other agency and local government representatives.

Climbers are strongly encouraged to consider enjoying the many other climbing options available in northeast Wyoming and the Black Hills area of South Dakota, during the month of June.

This is a description for the recently updated North Face Rappel Route.  This is the ideal way to rappel after summiting routes like Assembly Line or Patent Pending, or for rappeling in the afternoon shade on a hot day.  Rappels can be completed with a single 80m rope or two 60m.

1. Find a cairn roughly 20-30 feet skier's right (climber's left) of the topout for Assembly Line.  Down scramble on easy but exposed terrain to an alcove with a green-camouflaged rebolted rap station.  The first rappel is approximately 15m to a large ledge with the next rebolted rap station near the lip.

2. Rappel 40m down and slightly right, heading to a rebolted rap station in a dihedral under a large roof.

3. Rappel <40m down to a rebolted rap station on a pedistal.

4. Here you have two options: rappel ~20m to an older (but decent condition) rap station on the climber's left side of the column you are on, followed by another ~40m rap to the ground, or rappel directly ~60m to the ground from your current location.

These four rap stations are camouflaged green and were replaced in July and August 2021 (except for the optional 5th station, circa 1991). 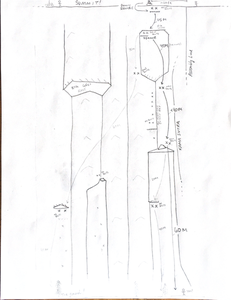