This is Fay Buttress's "King Line" and one of the best around. The crux pitch in particular offers superlative movement, rock, and position.

P1 (10/+, 60’): Tip toe up to a high bolt with an orange hanger - belayer should spot (or hide) lest ye both tumble off the ledge. Continue, and upon reaching the break move right to an anchor shared with Fondling Chaos's Daughter. Be careful of a loose block in the break directly below the last bolt. 5x bolts.

P3 (12-, 90’): Begin as per FCD, but hang a long sling on the 7th bolt (just above the narrow rest ledge halfway up the pitch) and instead of veering off right, head more or less straight up into yellow rock. Be exceedingly gentle with the Red Flake just above the crux and also when mantling onto the Floating Belay Podium; both are only connected to the wall through dark magic and the loss of the Red Flake in particular could render this pitch impossible. 12x bolts (the last 5x of which are independent from FCD).

P4 (13-, 90’): Climb sublime changing corners and their intersecting aretes through a roof and up to a good ledge. Lots of opportunities to fail. 10x bolts and a million and one stars.

P5 (10-, 60’): Not that great, but you have to top out, right? Head up to a bolt, then move right to a shallow corner which is followed past a couple gear placements (0.5/0.75 Camalots), a second bolt, and then on to a bolted anchor. This first anchor, at the top of the wall, is the Rap Now Anchor. There is a second one, located above, which is the Top Out and Go Rap Something Else Anchor (recommended).

Note: On P3, after clipping the final bolt but before mantling onto the Floating Belay Podium, you can opt to down-climb rightwards to a larger, more comfortable belay: the Deck of Cards Ledge. There is a belay bolt here which can be backed up with a 0.75 Camalot.

Begin between the starts of Dune Buggyin' and Fondling Chaos's Daughter beneath a high bolt with an orange hanger. 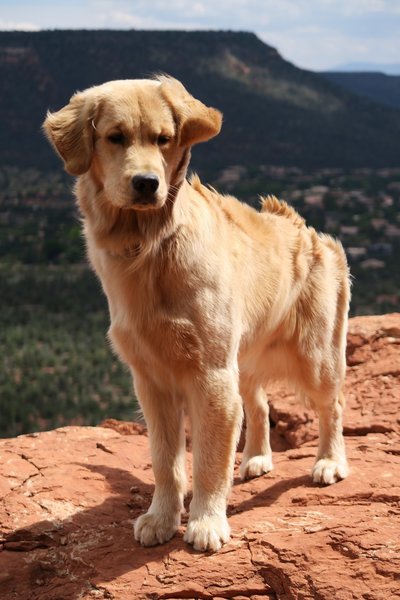 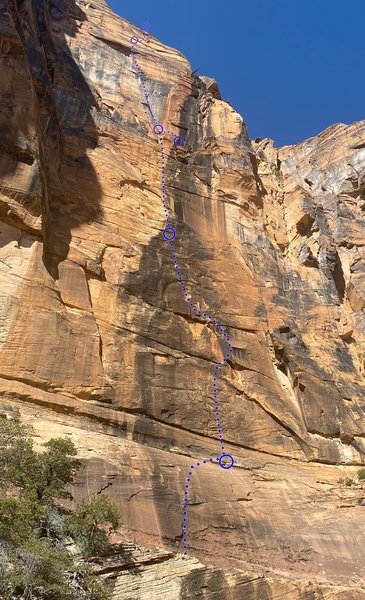 [Hide Photo] The line of The Golden Dog. You're aiming for the striking grey dihedral which slashes its way across the center of the upper headwall.