Routes in The Correction Crag

The Inverted Yield Curve is always a good predictor of an upcoming recession. Navigating the beta and fighting the pump is the key, or you'll see a drop in your portfolio. A fun start leads to the steep and cryptic crux, which is followed by pumpy moves to the anchors.

The line was originally poached after being red-tagged following its development; however, a key hold at the crux broke off afterward making the beta different and more difficult. While I didn't get the FA, this route has been a real gift for me. I've been working it off and on for over a year, and with the recent send, it marks some of the most difficult climbing that I've been able to string together. I'm not super familiar with the 5.12 end of things, but other ascentionists have compared it to the Eye of the Tiger (at the main wall) in difficulty, and it took me way more tries than Mufasa (at Mill Creek Block) which I thought may be soft for .12a. Either way, get on it, and we'll see where the consensus puts the grade at.

The Inverted Yield Curve is on the left side of the crag and shares the anchors with Derivative on the right. 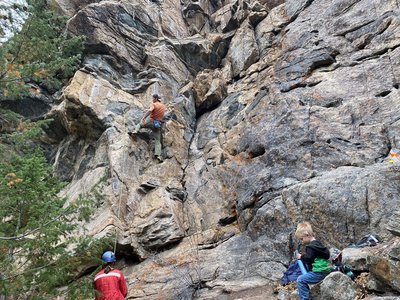 At the start; boy not impressed. Photo credi…

More About The Inverted Yield Curve