Per Julius Beres & Matt B: $2 timed entry permits issued by RMNP are definitely required if you arrive after 9a and before 3p.

Per Bob Siegrist: as of 6/11/20, the parking areas are no longer blocked off. RMNP is open.

Per Matt B: this area is currently closed to all visitors due to temporary RMNP closures. The entire parking area is blocked off. Please do not threaten access to this area by climbing during this closure to all visitors.

Gillett mentions the route called "Shark Sandwich" in passing while describing the descent route in his book. I am not certain this is it, but it seems close to the location, grade, and star rating he described.

Scramble up to a good ledge, and then fire up the obvious crack with good face holds. As you near the top, the crack goes to fingers and becomes steeper. The last few moves are fantastic with steep moves on good holds over solid gear.

The only bummer is that the rock is somewhat questionable for the last 25 feet or so. Be especially careful of the hollow jug at the beginning of the steep section. I very gently used it as a foot hold.

At the top, move about 8 feet to the right to a ledge with chains.

Get to the south end of the west face of Sharksfin. I prefer approaching on the new (2018?) trail that goes to the Half n Half area. Once you get to Half & Half, hike up the talus on its south side. Keep an eye out for a steep gully on the left that is blocked with a giant chockstone. A bit of 4th Class gets you around this. Clamber up the gully. You are now on top of Half & Half. The small tower to the north is Pinpoint. Pass that on the west side then. Look for a cool chockstone bridge above a rocky gully. Cross it to a nice grassy patch at the base of the SW end of Sharksfin. The route is to the left of a bolted line. 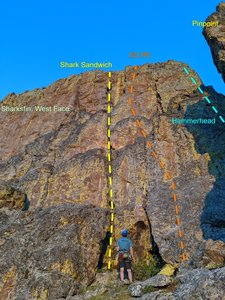 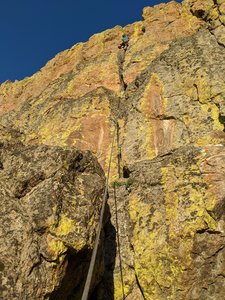 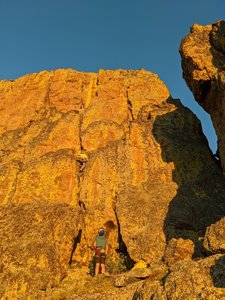 Crazy colors are due to alpenglow. Climber: Ben…