Ranch Hand is the poor man's deviation of "Prairie Fire", although it is probably the funnest route IMO on the cliff.

Climb the starting bolts "Prairie Fire". After making the mantel on the ledge, trend straight up instead of busting right (after the 6th bolt). It is identified by the obvious overhanging dihedral. From here, funk your way up with some trad skills to negotiate the dihedral crux. Once above, cruise through bigger holds past the spooky chockstones (they're solidly welded to the wall. I tried removing via crowbar, but those bad boys are stuck there). You can opt to avoid tuggin' on them if you'd like via holds to the left. Fun moves on big jugs get you to the final bolt, where a parkour-esque sequence gets you to the lava tube pockets.

After gawking at the geology, get your shit together for the final boulder problem crux. Sick moves on improbable slopers (colder temps preferable) help you trend up and right into the chains of "Prairie Fire." End with a spicy finish for good measure.

*This route could have (and am open to it) received its own anchors, but it'd make the final boulder problem a lot harder if so. This is a great training wheel for its brother line to the right.

One of the more unique routes at the wall, with really fun flowing movement up top.

Clip the first 6 bolts of "Prairie Fire," then veer left and straight up on the rest ledge. It is indicated by bolts on the overhanging dihedral and large chockstones above. 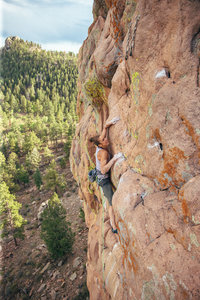