From CDOT: Colorado Highway 7 is closed daily from MP 23-29.5. Motorists can only travel through the area between 6-8 am and 4-7 pm. During these timeframes, pilot cars will lead alternating one-way travel. Drivers should plan for delays, and this schedule will remain in place through Memorial Day 2022.

During the closure, motorists need to take US 36 to CO 7.

Southern Comfort is a 2 pitch route with mostly mellow climbing of 5.6- 5.7 or so. One brief section of awkward 5.9 comes in near the top of the second pitch with good rock and good gear that is out of character with the rest of the route, but it does make it a bit more challenging and memorable.

P1 (5.6, 80-100'). Starting at the extreme left end of the central access ledge and just a meter or to to the right of the South Slabs route, step into a system of cracks and corners the rises up and left. While these cracks are individually discontinuous, protection and holds are pretty continuously available. At the end of the pitch, you can work a few meters to the left & belay at the bolt & chain anchor as for South Slabs and later move the belay), or continue up onto the ridge line of the feature and work out to the right (and eventually down and right) to get into the base of a series of right-facing corners with a gear anchor. This will prevent drag and make moving the belay later unnecessary but might be more trouble that it is worth. We belayed on the bolts & moved the belay later.

P2) (5.9, 100'). Starting from a good ledge down and right of the left end of the upper part of the cliff band and in an obvious right facing-corner, start up with jams, stems, and generally easy climbing. The route almost seems too easy most of the way. Right around the time you start wondering where the crux is, the last section of corner appears, narrows, and throws a section of 2-3.5" hard-to-reach crack at you. Plug in some gear, and negotiate the awkward but fun crux section, which ends at a small roof after the hard part is over. Climb up over the roof or go right under it and then up onto a ledge, neither option being as hard as the crux, then scramble up to the summit above.

A bit of wandering around on the ledge below the huge summit boulders will eventually lead you to find the summit rap anchors to the climber's right. Two 100' raps will take you back down to the main access ledge. The next set of anchors may be slightly obscured by a juniper tree at first, but they are visible if you look hard for them.

This route is on the far left end of the central access ledge and climbs up a series of left-leaning, low-angle cracks and flakes on the first pitch, then it goes up a series of right-facing corners to the summit.

A standard rack with a set of nuts and cams to 3" with plenty of runners. A 4" cam is optional. 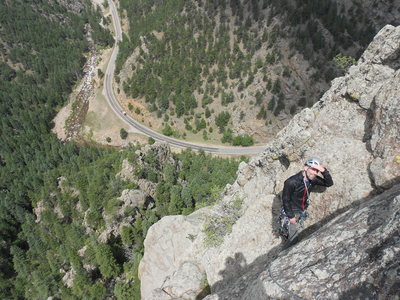