Start from a two bolt anchor off of a ledge (shared with Basalt of the Earth). Some tricky moves up cool pod-locks and face features with tenuous, fiddly gear lead to more straightforward fingers and hands (past the namesake block) and a thinner bit merging into Collar Blind at the upper roof blocks. Finish up Collar Blind. The pro through the crux is trickier than most at the grade in the canyon.
I had cleaned several large death-blocks off of this a couple of seasons ago, and worked the block that still lingers with the 3' bar for over an hour. It would move around, but I couldn't get it to release. Discouraged, I abandoned the line. Upon revisiting it later, the block has settled back into place, and doesn't shift at all while climbing past or standing on it. It doesn't seem any sketchier than many I've climbed over on basalt routes throughout NAZ, and the section it's on is the easiest part of the route, so the block can be be largely avoided if desired.

In between Basalt of the Earth and Collar Blind. Finishes on Collar Blind. Rap just skier's right of two tiny pines right next to the rim. Look for a lower 2 bolt anchor. 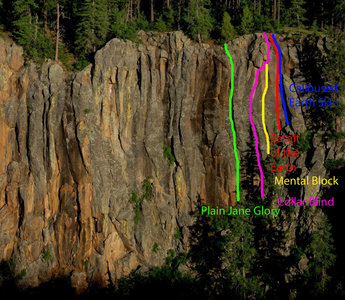