Routes in Found In The Duffle Crag

Scramble up to the alcove start.  Squeeze in and up.  Fun jugs will soon appear, leading up to a high grainy ledge.  Continue up the left slot for better pro (rightside one very grainy initially).  The upper part of the rightside slot would come into reach near the top.  Pull up into a big gap that recesses back.  Continue up the rightside taller juggy face with no pro (hence the PG13) and go all the way back (toward the road) to reach the old rap bolts with tats and biner on that summit's NE arete.

The anchor bolts feel solid but are very old.  Not sure how rusty underneath.  The hangers are the early rounded ones that aren't as thick as modern hangers.  No rap rings or chains.  Just one worn thin cord and another dilapidated one that a party prob threaded the rope directly through and rapped on, then pulled the rope across those cords and off.  We added an additional sling and donated a booty biner.  This anchor could use an upgrade.

Right of two alcoves to climber's right of Bung Hole marks the start of Raunchy Bung, to top out on the highest isolated summit.  Its bolted anchor with rap slings can NOT be accessed from the topouts of nearby routes.  Better to do this route last, as the rap touches down facing the road at near ground level, and other(s) could carry rappeller's stuff back down the approach gully.

Pro to 3.5", bolted rap hangers with slings and one biner. 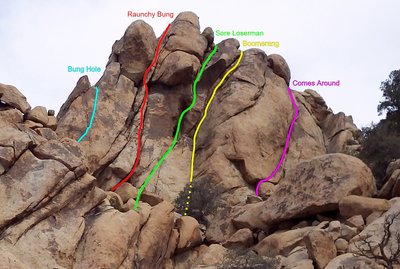 Upper main west face of Found In The Duffle.