Pretty adventurous for The Monument, not exactly stellar climbing, our experience was probably a 1.5 star for climbing but 4 four adventure. We did a lot of cleaning, so it's probably a better experience for subsequent parties. we pulled on some gear on the lead, but the follower was able to free everything at the moderate grade of 5.10ish.

It was pretty cool from a historical perspective as you get a great view of an old Carter Route that goes up the heinous chimney on the Northwest face of the Kissing Couple directly opposite the second pitch. We passed a bail anchor about 35' below the summit, it look like early nineties with its neon runner, so if you know anything about that, let us know.

P1. Start from a large, elevated ledge directly below the chimney. You can belay off one of the new #7 BD big boys. Climb the chimney to a good ledge and a fixed anchor. There not much gear in here, but it's a great size for a chimney, so not much is really needed. Just stuff your cams under the large chockstones, and you'll be fine, 80', 5.8.

P2. Ascend the wide crack directly above the belay. It looks harder than it really is (with a little ingenuity). Climb for thirty feet or so till it thins out, and make some moves around a difficult bulge (C1 or 5.10 TR). Climb more easy wide to the sub-summit, then ascend the challenging face with great protection to the top. The last move to the summit on this pitch is a whopper!, 80' +/-, A1 5.10, TR.

100 yards to the left around the corner from the Kor Route, on the outside prow of the Kissing Couple, lies a chimney in a distinct, large corner system that separates "Two Star Tower" form the Kissing Couple. 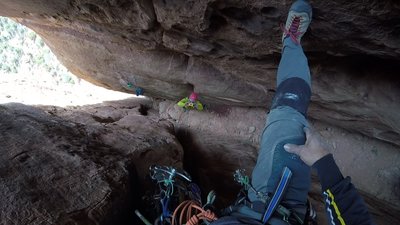 Looking down on the P1 belay. 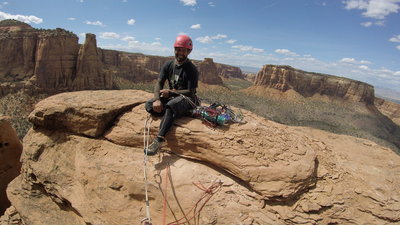 Dropping back in to the void. 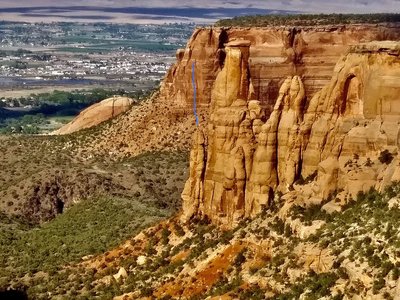