This is actually quite a fun route and is also one of the taller lines in this area, over double my height, making me think it is 12-13 feet. It starts on far left on the conglomerate side of Two Face Boulder. There are lots for your hands and feet. The catch is there's an inverted flake and some good feet, but they're a bit sketchy, so while there's probably 6 ways you could climb it, I would stick to stuff that looks and feels solid and tread lightly. I gave it PG-13 rating because taller for the area, slightly chossy, lots of plants, and cacti at the start of the climb, so the crashpad positions aren't ideal. There's also a small cluster of cacti right at the top out in the wee bit of dirt up there, so don't blindly look for a solid hold like I did, lol, hence the name. It's likely people have climbed these boulders at some point, but no chalk, the routes are pretty raw, and nothing on MP or in guidebooks, so I'll call it FKA (First Known Ascent).

It is on the choss side of Two Face Boulder just south of main road that heads to the top of Rock Park. 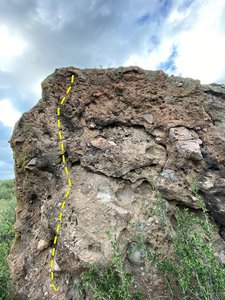