Excellent and varied adventure on Trinidad Sur. One of the shortest approaches, as well. Unusual features are some steep climbing at the start, and good face climbing on tiny crimps. Seems to have potential to extend to the top.

P1 5.10
Either head straight up (unobvious 5.10 move with maybe one piece of pro) or scoot left then back right up a little ramp the first bolt, 10 m up. Pull some surprising and fun moves around a feature, to another 20 m of moderate terrain straight up. Bolted anchor, 40 m.

P2 5.9
Head left then enter a strange ladder-like corner feature. One bolt protects it at the beginning, then a small cam, then some medium run-out moves above. Keep moving up and left, eventual reach a bolted anchor. 40m. Kind of a junky pitch, the only one on the route in my opinion.

P3 5.10
Super fun! Techy and requiring some serious focus. A bolt has been added, so not so ‘runout’ as marked in the topo, but still you want to be on your toes. And fingers. Lots of fingers.

P4 5.10
Stem in a corner then a short OW section. We did bring a #5 and were not sad to have it. Basically opposite style of climbing from pitches 3 and 5.

P5 5.10
Another face-climbing focused pitch, but super short. Still good. Yes, you could link these but no real reason to.

P6 5.10+
Mega pitch! Really fun. Jam straight up, pull around to another system, and blast off. Mix of hands to fingers, ending in a layback steming corner to the ‘anchors’.
As of Feb 2020, there are two weirdly-placed new bolts up high and left at the anchor (probably looking to see if the route could continue), and two rusty-ass bolts from the old aide route Pegadito.

Rap off the rusty ass bolts (possibly fixed by now) and check out the sweet aid line, which I heard had been freed (anyone know?). Get down 30 m to another old rap station, then 30 m further gets you to the top of P4. Rap the route from there.

On Trinidad Sur, the distinct white section of Cerro Trinidad closer to the bivy.

From the Trinidad bivy, walk back downhill (away from the laguna). Head right up the first gully. When you get to the base of Trinidad Sur, where the easy talus ends, you can either solo up some easy slab up and right to get to the base, or scamper (bushwack) through the mini vertical forest.
Start of the route is obvious overhanging dihedral-looking feature with three bolts, about 10 m off the deck. 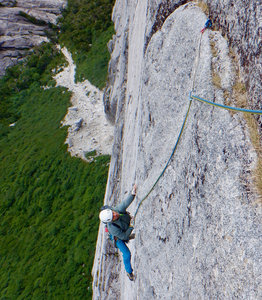 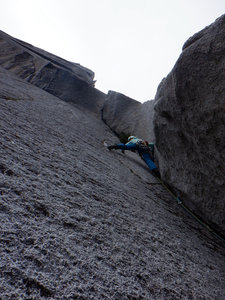 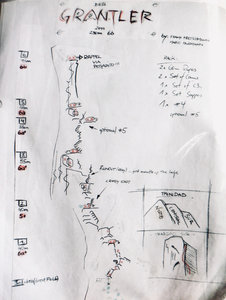 Topo from the bivy. See bivy site for another v…