Circa 1998, local GJ climbers, Joel Arellano, and I had set out to climb Get a Life. Without sufficient location beta, we found ourselves bailing off of a dead end line 100 feet left of GaL and having wasted most of the day. We wandered around and eventually did find Get a Life. While GaL is an impressive line, we became more attracted to the unclimbed fat crack to its right. Big Camalots had just recently been released, so we each vowed to throw down some $ and return with a proper rack.

Life got in the way, and I ended up back there with Pete Clark a year or so later, packs bulging with fat cams. We made the 45 minute hike from the Coke Ovens trailhead and proceeded to climb  the first pitch. 15' of loose, fingers thru hands lead to 80' of blue collar, hand-fist stacking and 4.5" OW corner groveling. This went at ~5.11c and was a great start.

As I pulled over onto an obvious belay ledge, I was surprised to see anchors already in place (head scratch)! The second pitch is ~ 60', went at about 5.10b/c, more wide crack but substantially easier, and . . . ended at another set of belay anchors! I was quite puzzled and a little bit peeved at this point. As any experienced desert climber could tell, we had just ascended 150' of virgin rock: teetering rock piles atop 'must use' edges, flakes that break with a flick, loose but easily trundled blocks in the line, zero chalk, etc. How could it be?

Continuing, now at what would become the crux third pitch, an awkward and puckering escape from an overhanging bombay pod required a fixed pin to control the run of the rope from edges, and so it was. From here, we bailed for the day, exhausted and confused, and hiked out.

Our next attempt, we used the top down approach using a 20 foot 2x6 bridge :), and rapped down the tower finding one more anchor on the line.  We repeated the lower pitches and sent the crux (5.11+ OW, sustained), continuing up the crack 60'. The fourth pitch, absolutely stunning, is a left-leaning, stepped, and overhanging 4.5" OW for 70'  joining GaL at a big ledge. The last pitch - which I agree is scary and a bit dangerous - went down, and we celebrated on top.

Almost forgetting, we looked for a summit register and found a message from other climbers admonishing us for adding protection to an ‘existing’ line. Someone had been on it since our first ground up attempt! 'BS' we said, no one had actually climbed the route before our ascent, free or aid. In our opinion, it didn’t exist yet as it had not been ascended.

We later confirmed it as such over beers in GJ with one of the other climbing party. As it ended up, the other suitors had (smartly) established the belays from the top down, prepping for a more efficient ascent; we just happened to get there first for an actual ascent. The line (4th pitch) was featured as the cover of a 2000s era climbing magazine, John Thesenga climbing and naming the route Wide Load, 5.11+.

Pete and I had agreed on calling it 'Industrial Strength' before making it to the summit. So there it is, a slightly controversial origin story for what I say is the best OW tower route anywhere. P1, 3 & 4 are each 5 star OW pitches that never feel easy. The crux is brilliant and unforgettable (and nicely protected). There's even the scary last pitch to remind you that you were on a tower, in The Monument. It faces South, it's a great late fall/winter/early spring route. For an aspiring desert rat, it's a great annual fitness test; blue collar climbing with exposure, spice and consistency.

Industrial Strength (AKA Wide Load) is located 15 feet climbers right of Get a Life. They are  located on the Clueless Tower, 45 minutes down the trail from the Coke Bottles/Upper Monument trailhead on Rimrock Drive. Alternately, as described in 'Get a Life,' there is an easy walk to the rim where a ladder or rappel + tyrolean traverse provides a top down approach opportunity.  Easiest top down beta: Park about 3/4 of a mile or so before the coke ovens/upper monument canyon trail when coming from the visitors center, there is a moundy 30' tall rock formation on the left side of the road, between the road and the canyon rim.  Park and walk out to the rim/tower gap 1/4 mile from here.

Bring an extra rope and rappel from a  tree, aiming directly off of the apex of the rim into the notch between rim and tower.  Go down about 25 feet where you can land on a ledge on the tower and climb 5.4 up the back side of the tower.  To reverse this you can rig a tyrolean by using a tree on the tower or simply climb down and ascend your fixed lines back to the rim.  Tower Rappels: find anchor on south side of tower: short first rap ~60 feet to anchor.  Next, ~150 foot rap to a ledge below the crux pitch of GAL, then  ~150 ' to the ground.  If you wanted to stash water or other supplies on the way down, the Industrial Strength p3 anchor is an equal distance rappel but to the rappeller's right and somewhat hidden in an alcove. 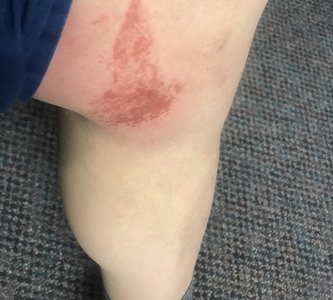 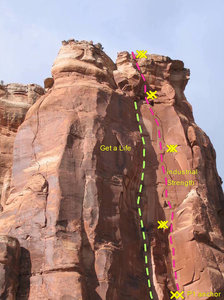 The line: right side, splitter just right of th…

The top down approach. 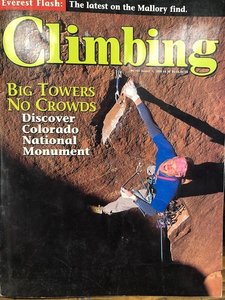 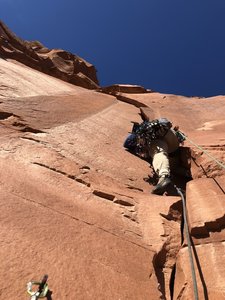 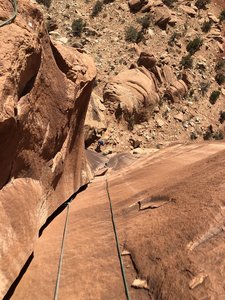 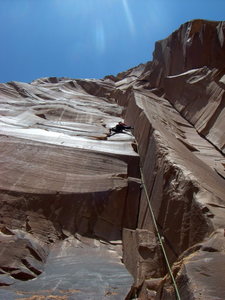 Climber on P1 of Get a Life; P1 Industrial Stre…