Nattiq (Inuit word for ringed seal) is a two-pitch route on the north face of Seal Rock with a slab first pitch and a unique second pitch with a variety of climbing including some face climbing, a small overhang, and a prominent flake.

P1. Start at a some low angle, broken rock by a tree, and look for the first bolt about 20 feet up. This is a moderate and engaging slab pitch with a distinct crux at the fourth bolt. This is an interesting pitch on its own and is recommended for those not wanting to do the second pitch. The bolt line follows the path of least resistance and some long draws/slings are recommended for bolts 1, 9, and 10 to minimize potential rope drag. Venturing too far from the bolts will result in a garden of lichen, 5.10a, 110 foot (33 meters) 12 bolts, 2-bolt anchor.

P2. Climb up the rising block/ramp from the anchor to an obvious, thin flake, and clip two closely spaced bolts. The spacing of the bolts is to prevent decking into the ramp in case you blow the cryptic face climbing sequence. There are several ways of doing this section of face climbing ranging between low to mid-5.12 in difficulty. Next, move through the overhang which is surprisingly the easiest part of the pitch, using decent holds and some resting jugs. Use long draws on the fourth and fifth bolts (the last two underneath the roof) to prevent rope drag at the top. Reach over the roof, clip a perma-draw (in place to facilitate cleaning and getting lowered back to the anchor), and start a sustained sequence of moves to reach and climb through the flake to its top and another rest. The remaining part of the pitch is another challenging sequence of face moves. It might be useful to use a long draw on the second to last bolt to facilitate clipping, because falling at this point might require some advanced rope shenanigans to get back on route, 5.12 a/b, 60 foot (18 meters) 10 bolts, 2-bolt anchor.

Due to the diagonal nature of the line, there is no easy way to clean the second pitch, and it is recommended that the pitch be seconded and cleaned. In case the leader decides to back clean the route it is recommended to clip the climber's side of the rope to the perma-draw to prevent swinging into space and away from the first anchor. When working the route, it was best to clip to the perma-draw to get lowered to the anchor, untie, pull the rope through, and then tie back in and lead the pitch once more.

Note: a single 70-meter rope is not sufficient to rappel to the ground from the top anchor. A second rappel from The Perfect Storm's intermediate anchor is required.

Nattiq is currently the rightmost route on the north face of Seal Rock. 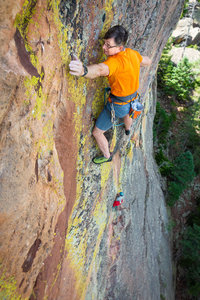 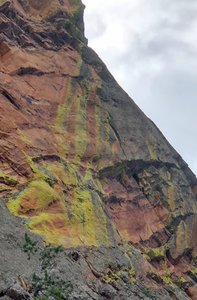 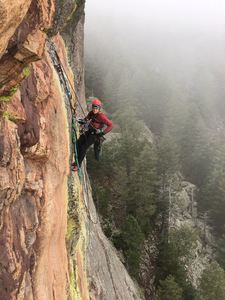 Bolting the upper pitch during a cold and drear…