The NE Couloir, AKA The Wheel Deal

Scott McIntosh and I completed this route on June 4, 2019.  We found full winter conditions with the SNOTEL showing 61” at 10,000’.  With that depth we only walked about 1.75 to 2 miles before the first footwear change, from approach shoes to ski boots.  We skied through the forest and arrived on the remnant rock glacier at roughly 8am.  By 8:30 we’d again changed shoes, this time trading ski boots and skis for climbing boots and crampons and headed up a wide couloir toward a prominent show ledge, wide and steep.  Sitting above a 400’ cliff band on a 55 degree slope we decided to make a belay.  The spot was a small broken buttress of rock, its toe dipping into the snow.  The rock on the NE face is a very hard and compact quartzite that yields few cracks but many loose blocks, some of which piled above us.

The first proper pitch was 80m across a steep snow slope toward another buttress.  Above the traverse was the gut of the NE Couloir itself, periodically spitting stones and ice chunks on their way directly to the bottom.  Here we belayed at the toe of a largest buttress splitting the couloir.  The belay I constructed was mildly alarming at the time but later came to appear typical of the route: A tipped out number 2 Camelot in a bottoming crack, and a yellow Mastercam slotted in a weird ripple sideways.

The second pitch started up a loose off-width/chimney with poor protection.  At the top of this section the pitch then required a downclimb back onto snow which we traversed for 100’ or so to a belay at the base of easy mixed terrain.

Pitch three was the first of two crux pitches.  This pitch followed the easy mixed terrain up right before cutting back left in a shallow snow gully/ramp below a wide channel. This channel appeared from below to be covered with ice but was in fact a series of down sloping edges frosted in a variable mixture of snice, snow and rotten ice.  My scratching picks failed to uncover even so much as a seam for a knife blade.  The angle was 75 to 85 degrees with short sections of  90. Gear was poor to non-existent until a shallow slot for a number 3 materialized under some snow near the end of the difficulties. At one point I was 50 feet out on a #4 wire half in a shallow, bottoming out crack.  After the lead I felt this pitch in the condition I found it warranted an M6 X grade  The belay at its conclusion was made from two too small knifeblades and a tipped out #2. (note: After examining our photos we believe this pitch could be avoided, in the right conditions, by traversing right at approximately mid-height of the pitch and heading for the crease between a rock tower on the left and the main NE. face on the right.  It appears (?) that this could yield easier ground, but we could not see into the crease and so cannot comment directly).

Pitch 4 was one of the easier pitches.  It leads right on steep snow from the belay and then up a snow ramp to the main NE face wall itself.  A decent belay can be constructed in relatively solid rock below the prominent ice bulge leading up into the NE Couloir itself.

Pitch 5 started out with some easy snow traversing toward the main ice bulge.  The ice we found here was WI3 and fat enough to take screws comfortably.  Rather than belay in the exposed position at the top of the bulge (we’d seen large chunks of ice flying over the top of the bulge), we simu-climbed up another 60 m from the top of the ice.  The climbing was steepish snow, gradually trending rightward to avoid a deep gully cut by sliding and falling debris from the upper couloir itself.  Belay was at the toe of a loose rock buttress that split the couloir proper.

Pitch 6 was another relatively easy section of steep snow climbing upward toward the final mixed section leading to the summit ridge.  This pitch is however heavily exposed to falling debris from the summit cornices and the walls of the couloir. In addition, the runnel in the center is to be avoided as it periodically sluices a heavy mix of snow and rubble.

Pitch 7 was a shorty to move the belay into a crack in the right wall of the terminal end of the NE Couloir itself.  The belay was solid, but the position was awful.  Surrounded from above on all sides by snow mushrooms, icicles and loose rock, it is not a place in which I’d recommend spending much time. A constant waterfall of icy slush poured down on me and at the end I was soaked to the skin.

Pitch 8 was the second and final crux of the route.  Immediately before starting we were hit by a large shush-a-lanche which rattled us into a “let’s get the hell out of here” posture.  While it appeared from earlier sketchy trip reports that parties who found the route dry exited up the right wall/buttress of the couloir, we decided that was out of the question.  There were simply too many giant hanging icicles and other nasty things above us.  Instead we elected to step across the now-narrow couloir and start up a short mixed face below a car-sized mushroom of snow. The climbing required Scott to do a huge amount of excavation and some very delicate hooking while trying not the think about the mushroom poised above.  At the mushroom, the pitch turned right and headed up a faint buttress that appeared to be nothing more than a pile of stacked plates for 30-40 feet.  It is the single loosest section of rock I’ve ever encountered anywhere and I’m still not sure how it was holding together.  Scott capped this brilliant lead with an actual Scottish-style tunnel through the summit cornice to arrive at the safe and flat summit ridge.  Scott says the pitch is probably M5/M5+ R. I say X. Doesn’t matter. Its just spooky.

On the entire route I believe we saw one fixed pin.  There are no fixed belays and retreat by rapping above pitch two would be very challenging and potentially dangerous.

This is one of the best alpine mixed routes I’ve done in the lower 48. If you're looking for a real alpine climb with some serious technical sections at higher altitude, and you don’t mind a bit of an approach, this gem is indeed the Wheel Deal.

The obvious line on the NE face of Wheeler Peak 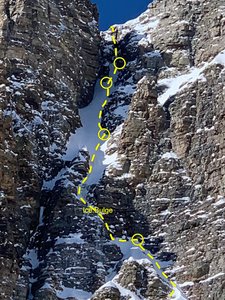 pitches five, six, seven and eight of the Wheel… 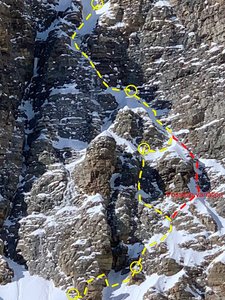 Pitches two, three, four and five of the Wheel… 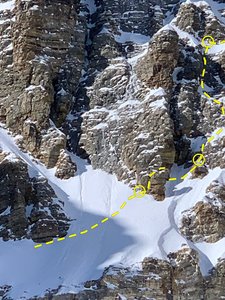 pitch one, two and three of the Wheel Deal 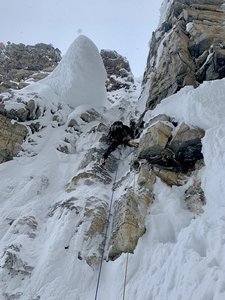 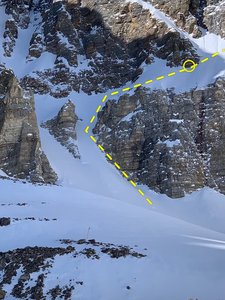 The approach couloir to the Wheel Deal from the… 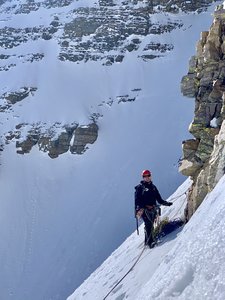 Scott McIntosh at the first belay on the Wheel… 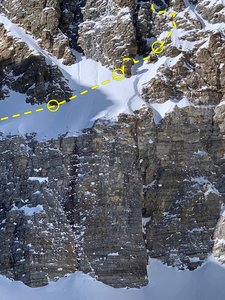 Pitch one, two and the beginning of three of t… 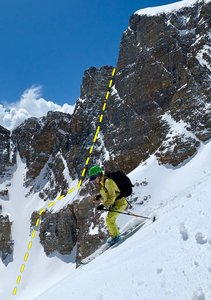 Skiing the line of descent from the Wheel Deal… 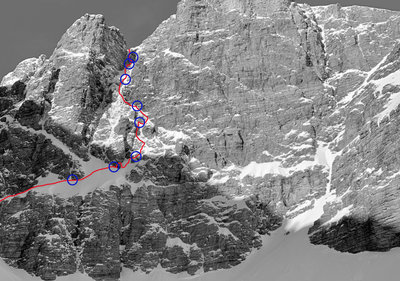 The Wheel Deal showing line of ascent and belay… 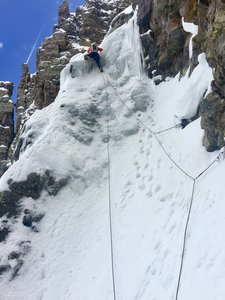 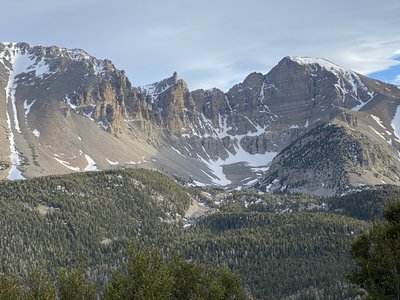 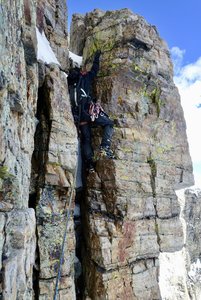 Scott scratching up the start of Pitch 2

More About The NE Couloir, AKA The Wheel Deal