Pile In the Sky

Update from the Flatirons Climbing Council July 2021: due to late nesting of peregrine falcons this year (2021), this area is projected to be closed until ~Aug. 12, 2021

Pile In the Sky aka Pile Rider aka Rat Scat Fever aka Mound in the Clouds aka The Wobbling Wall aka Tower of Chowder aka The Junk Above Us aka Trash in the Attic aka Celestial Mess aka Crap Champion aka Over Load aka Donkey On Top aka A Place to Keep Leaving aka Choss Fondler aka Hugging the Mud Burger aka The Big Latrine aka Latrine Dreams aka The Turd Locker aka Infinite Shit aka The View Through Manure aka Crying Beside the Dumpster Fire aka Scent of a Scrotum aka Pile in the Sty is a lofted glob of compressed sludge, distant sister-filth to the Fisher Piles, brother-junk to the never far enough away Garbage of the Gods, yet another rud stub of tumbling muck in the piley Slabirons.

Due to Pile residing on a prominent wad of tottering rot high above the trampled dead Royal Arch Trail, the line might receive one star for position, a star to be immediately deleted because the route is on the Third Slabiron. It may be that Pile may maybe earn a star for requiring a long enough approach to eliminate all possibility of crowding at the base, yet this star must also be subtracted for the reason it was given.

This disenchanting, heart dysrhythmiating climb persistently staggers sideways or ducks under rubble, weaving between regions of rat scat shellacked sand and bird turd lacquered dirt as it strives to hold astride a narrow strip of less unreliable grit; the only path of almost intact gravel on this “kinda pretty from an immense distance” face. If the closely bunched bolts are not obvious, or entirely obscured from view, due to the impenetrable shroud of silt-fog drifting down to cloy the wall, the leader may still find opportunities to skyhook buckling jugs or hammer bashies flattened against the backs of sandy pockets.

If you are a commonsense bereft choss-mauler, begin Pile’s pile by constructing an anchor beneath your feet in the shifting jumble of mobile dross that constitutes the staging area (Toilet One), so your belayer won't get plucked to her death when you zipper the sand implanted bolts. Next, stickclip as many bolts as possible, then dog up and clip all the rest, but be sure to savor the 5.2 traverse between bolts 5 and 6 (optional bivy cave, mandatory latrine). Take a leisurely moment to roughly caress the freshest top-layer of stratified rat scat cushioning the cave floor (three Layton Kor fists thick). When thoroughly scat-sated from sinking fingers in stink, continue somewhat upward, dizzyingly zig-zagging in search of another scenic defecation station, slathering scat-lather on the decomposing holds as you go.

To avoid slamming into any of the many deadly ledges that annihilate all possibility of aesthetic appeal for this climb (each an ever more majestic location for an open-air toilet), never cease vigorously stickclipping upward, or wide to the side, doing your best to not back-stickclip yourself into a Z stick-clip or X-rated X stickclip, untangling your way until safely established far above the final slanting ledge, where you can make the final dusty jump for the anchors from a rattling horn.

You may notice a mystery pin on the last slant ledge sunk behind a rhino-sized wad of compressed munge to the right of bolt 9 (site of Toilet Five, and high-point on my poo-inducing fifth stickclip assisted –failed– attempt). Clip this pin if you are one of those courageous dolts who regularly seeks out the challenge of dyno-halting rope drag.

Ignore the rambling rants of elderly trad-hippies loitering under slimy 5.8s in the gym who attribute the provenance of wobbly piton to the Stettner sisters (though ferociously bold, junk-loving hirsute beauties we all laud in song around desert campfires, the pin is in fact an artifact from Joni Knub’s 1982 on-sight ground-up rope-solo FA wearing navel weights). As you will quickly discover when some rashy tradster blathers at you, such scruffy alco-funked, nut-fumbling curmudgeons believe desert debris dreamy and wax amorous at the sight of stacked trash. These old-school goons are never to be trusted with route recommendations.

Descend by whipping off the top of the Outer Wedge, ripping all the fixed pro as your rope strafes flakes flung into space and cuts.

Note 1: a blocker knot is mandatory if your rope is shorter than 70 meters!!!

Note 2: all toilets are omnisex.

Note 3: Joni Knub did not give permission to retro bolt her route.

From The Ghetto bouldering area, scramble north to the base of a choss-poxed wall.

The Ghetto is not easy to locate. Expert local guides can be found seven nights a week at Scintillations Spa on East Colfax or The Real Yeast Boutique in Highlands Park. 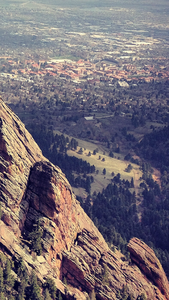 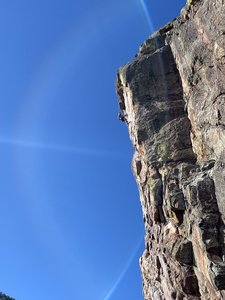 Paul G. past the last ledge latrine on Pile, sc… 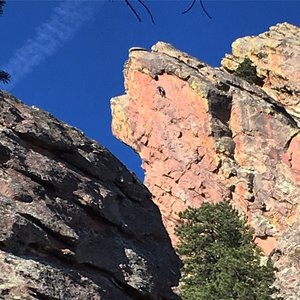 Pile in the Sky.

More About Pile In the Sky