This route is the right of the two bolted lines on the upper section of the P-Funkamerika Dome.

It starts off climbing moderate Huecos to a ledge and then a distinct crux between bolts six and seven.

The most recent Mammoth guidebook lists this as having six protection bolts but there are in fact seven. The last one is hidden in the large Hueco a short distance from the anchor. Two open shuts, just below the top of the wall, serve as the anchor.

After you clip the anchor turn around and check out the massive raptor nest in the natural perch on the next formation over.

On a Hueco covered fin of rock on the left side of P-Funkamerika Dome. This climb begins just outside of the low angle chimney. 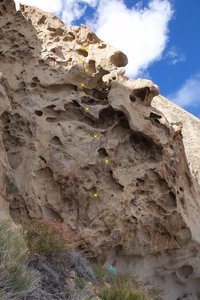