Great if you like chimney climbing, not so great if you don't. I didn't like chimneys before I did this route, and I liked them after I had done it. So go figure.

P1, 15m(ish), 4c
Climb up the corner doing some awkqard moves  until arriving at a ledge with 2 anchors. More of an access pitch than anything.

p2, 15m(ish), 5b (maybe 5c in my opinion)
Move up and left from the anchor into the chimney, following the bolts. Don't forget to use both sides. Stem? Inch-worm? Face climb only to make it harder? I advise going up a little farther than you might like after the last bolt in the chimney, until you find the faceholds to traverse out right and do a little face action until reaching the anchors.

p3, 20m(ish), 4c (according to the guidebook, 5c in my opinion)
Move back up and left into the chimney - but face climb up the first few bolts - I think staying left of them is easier? Then chimney the shit outta this pitch. There's a variation that goes out right on the face, but we kept to the true left variation that goes way deeper into the chimney than you'd expect. Who knew you could feel so secure and insecure at the same time? Worm your way up and left following bolts, and eventually back right to a crack with some holds to help you chimney to the top - move right onto a cluster of large wedges stones and clip the anchor.

p4, 15m(ish), 6a (grade seems fair, or by this point you've got good enough at chimney climbing that all chimney grades feel soft)
Chimney and stem your way up the slightly wider chimney straight up to the anchor - carefull when it starts to widen at the top, don't forget your other climbing techniques and don't get so spread you get stuck.

Rap the route, but use the anchor opposite the p3 anchor on the main wall. I'd recommend rapping p4 and p3 in seperate single raps so your rope doesn't get stuck when you pull.
We rapped down to an anchor slightly higher (8m?) and to the right (4m?) of the p2 anchor because there's a frayed cable that can make you nervous about your rope depending on which side of it you rap down. From that anchor we barley made it straight to the ground with a 70m.

Up an in the corner below what looks like a gigantic crack/chimney. 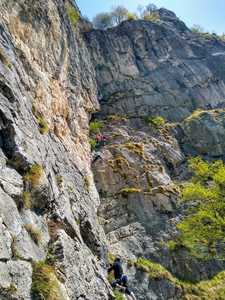 Foreground = some dude climbing something else.… 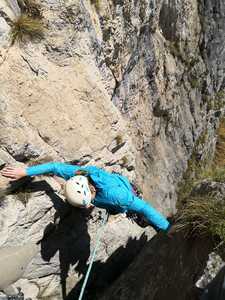 Polina on the stemming finish to p4. 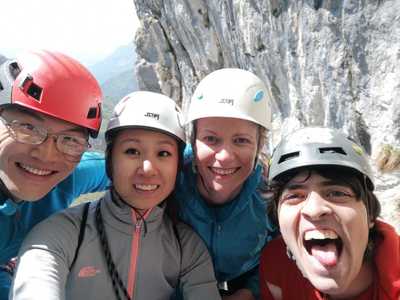 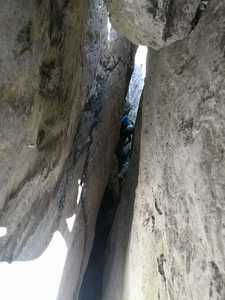 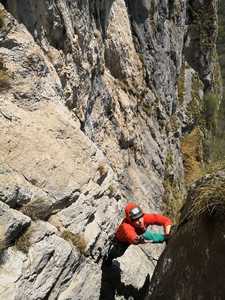 can't quite reach that last bolt yet... (nearin… 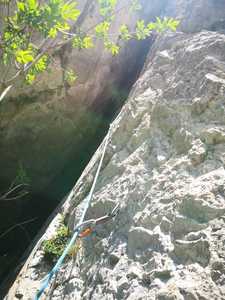 Climber leading aka dissapearing deep into the… 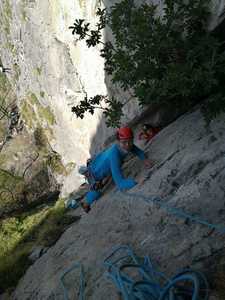 Sid finishing up on the face climbing atop p2,… 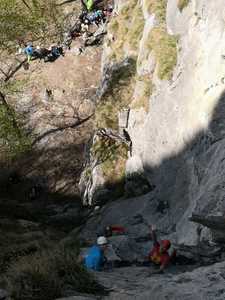 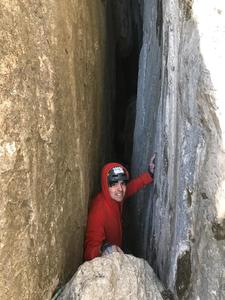 Me following up and almost at the p3 belay. 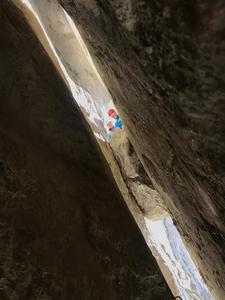 More About Via Del Gran Camino