A contender for the best technical winter mixed climb in the High Sierra. The "big brother" to the standard Winter Route next door. Much like that route, this one holds little visual appeal as a summer rock climb, but in winter when filled with frozen snowmelt from above it becomes a much more interesting and tantalizing endeavor. Depending on the source this route is listed as Grade III or IV. Expect a full day with the approach and long descent.

Aspect: south facing wall from 10,000-12,000'. It seems that the best conditions are found in the first week of March (maybe late February as well) on BIG snow years. A healthy winter snowpack on the summit plateau helps feed the ice that forms within the chimney system and is necessary to fill in the lower-elevation approach gullies. The first winter ascent occurred in a relative drought in 2007, and they found some ice and climbed half the route in rock shoes. The second winter ascent and our following one were done in 2017 (200+% of normal snowpack) and 2019 (~170%) in full ice and mixed conditions with almost no "pure" rock climbing. By mid-March the south facing wall is roasting in the sun. Some subsequent ascents in late March and early April 2019 reported finding little-to-no ice and wishing they had brought rock shoes instead. The topo posted here is representative of the route in good late winter form and should not be used in lieu of good judgement - make smart decisions. The route can be glassed from the trailhead.

The crux P5 roof (5.8 if dry and in rock shoes; M4/hard in crampons) was bypassed by earlier winter ascent parties who tunneled up deeper into the chimney and out a small birthing hole onto the belay ledge. This “thin man’s squeeze” was impassable for my larger frame. I could barely even push my helmet through the hole above me - as such I suspect the blocks in the chimney may have shifted here. Later parties also confirmed they did not fit through, so plan on getting rowdy pulling out over that wild roof with slotted picks and skidding frontpoints. 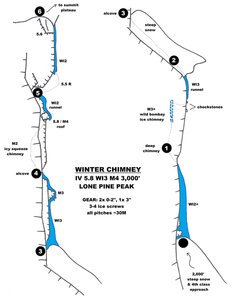 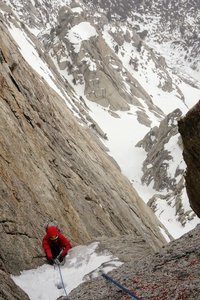 JK pulling into an ice runnel after the P5 roof… 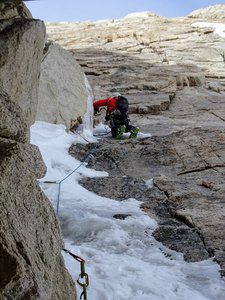 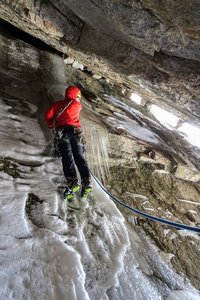 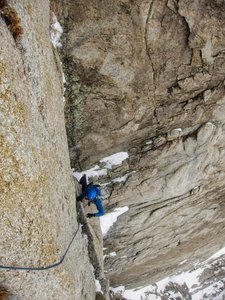 Topping out the last bit of P6 onto the summit… 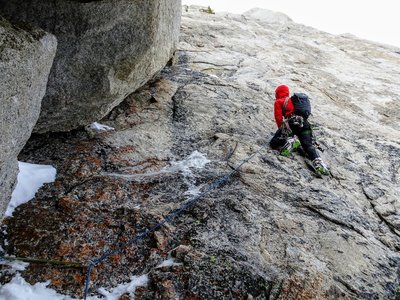 Joel on easy but runout ground on P6 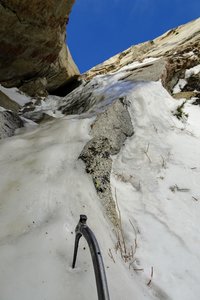 Looking up an icy P1 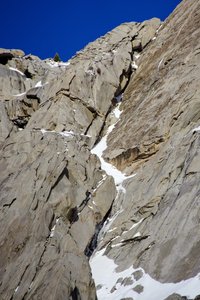