Below the Street Dog Fight climb you have an easier to approach cliff band with a few ice flows coming off the cliff. The second longest one with a curtain at midway we dubbed Attic Boys. After soloing the first 20 meters of WI 2 you get to a sketchy ledge, out of the way of falling ice, and build a belay. From there you climb up the short WI 5 curtain to a WI 3 ramp until you run out of ice and either build a V-thread or sling rocks for rappel.

Lower cliff band, below Street Dog Fight, closer to the lake. Climb is relatively tucked back into a slot corner. 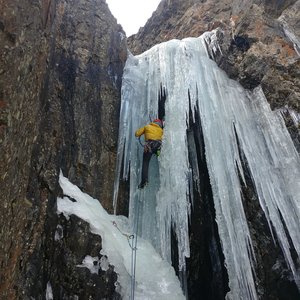 Photo of steep curtain at mid point of climb.