Routes in Off Balanced Rock

Read about Anchor Replacement and Restrictionsmountainproject.com/v/utah/… in Arches National Park

This is an unfinished entry, as I could not find much information on this route elsewhere. I believe it is "Camino Route" (5.10+) as published in Eric Bjornstad's guidebook "Desert Rock", but I haven't been able to get my hands on the book to check. I wanted to prevent other climbers from mistaking it for the Northeast Chimney. Has some interesting movement on it, and if it cleaned up a little, could be a very nice addition to the rock.

This route follows the north-eastern crack system, which splits into an interesting double crack system about 20 ft off the ground. Instead of jamming I found that climbing the awkward double crack system like a wide chimney was the best way to go about it. The route works its way into a small triangular chimney before stopping at possibly one of the worst anchors I have ever seen outdoors at the top of P1. 75ft, 5.9.

The route continues on to the south of the sketchy anchor, leading into a proper chimney of unknown difficulty. After seeing the P1 anchor I decided to rap down and change my now soiled underwear. 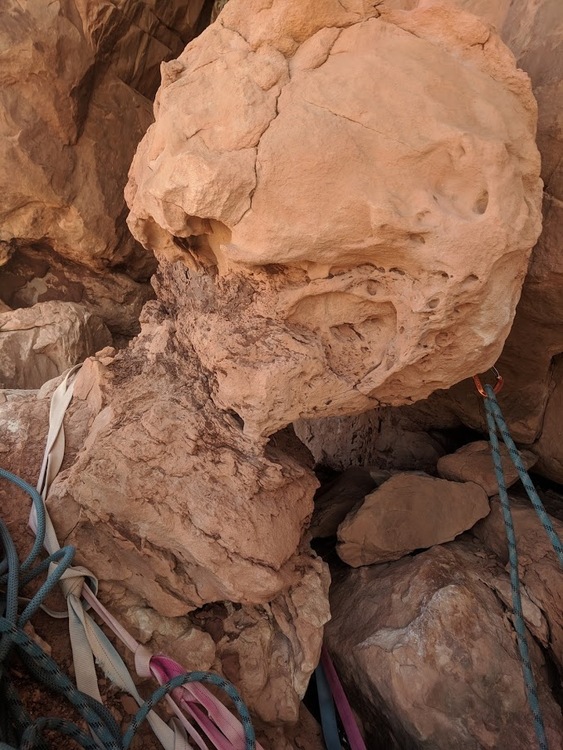 The pitch 1 anchor on this route is a mess of a couple of strands of sun-bleached, half-torn webbing (I unfortunately had no replacement webbing on my ascent), wrapped around a large eroding, mud, golf ball. I left a 2nd quicklink for the next climber, but the next climber will inevitably want to switch out the webbing, or find a better spot for this anchor all together.

Park at the balanced rock formation pullout, walk around the north side of Off-Balanced Rock (Walking in the storm washes as much as possible. until you see the mellow crack system headed up on the north east side of the formation.

Note: This climb is NORTH of the two large boulders, while the easier, standard north-east chimney route starts SOUTH of these large boulders. 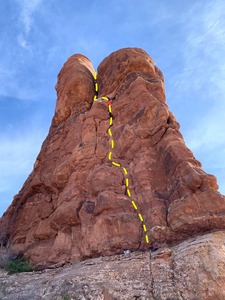 Topo of the route 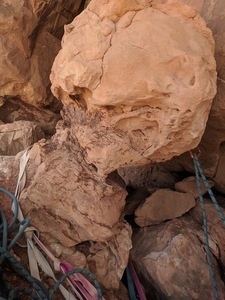 P1 Anchor from the side, Note the eroding mud r… 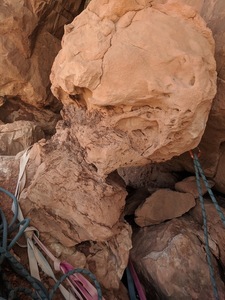