In the early '90's the USFS banned all placement of bolts in the Superstition Wilderness. This unfortunately includes replacement of existing bolts. Violating this ban may result in climbing restrictions on this beautiful area. Please think twice and go bolt somewhere else.

Minimal pro, an occasional cam and/or nut. Several large chockstones could be slinged, but not really necessary. Two crusty classics at the summit for belay, which don't instill much confidence for the first rap south to ledge. Second rap south from chain anchor is full single 70m. 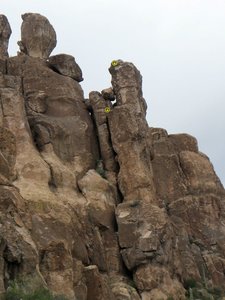