The Trough at Tahquitz Rock is probably the most consistent ice route to form on an annual basis. It is not every winter that it forms but will come in more consistently than almost anything else.  Due to this consistency and the moderate nature of the climbing itself makes The Trough is one of the more frequented ice routes in the area.
The historical significance of this route being that it was the first technical rock climb makes since it was the first to be done in the area as water ice as well. As an ice route the Trough is brilliant and is way more full value than in the summer!
Start early and climb fast, most parties end at or just before PTL but going to the top can definitely  be worth it even in mixed conditions. 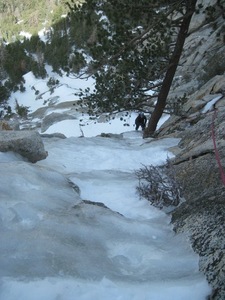 Lokking down at Pine Tree Ledge in perfect cond… 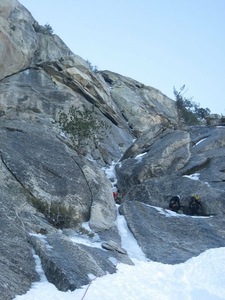 Start of the Trough in OK conditions. This d…

More About The Trough Ice